Dutton as Voldemort: What's that about?

Sure you all know about dopey Plibbers likening Peter Dutton to the character of Voldemort from the Harry Potter books and movies. This was actually preceded by a cover on the West Australian, which has almost as much occultist floggery in it as Sly News and the Failing Terrorgraph.

Plibersek, like all those high up in the Australian political establishment, is a malignant moron, so she almost certainly got the idea for the sledge from that issue. 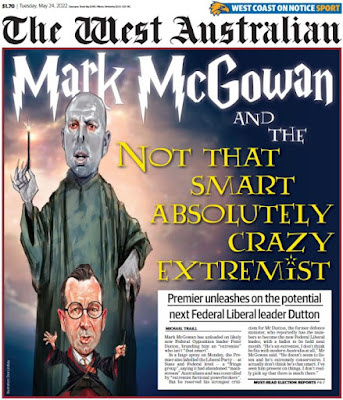 The "conservatives" in the MSM are all repeating the line that she mocked his appearance because she and the other Labor pollies find him formidable and want to make the normies see him as ridiculous.
I think that's a big part of it. But she also made a very specific reference to the fear of children:
Speaking on radio station 4BC, Ms Plibersek was asked her opinion of Mr Dutton, who is almost certain to be the new leader of the Liberal Party.
'Well I think there will be a lot of children who have watched a lot of Harry Potter films who will be very frightened of what they will see at night, that's for sure,' replied the Labor frontbencher.
Scott Emerson, who was interviewing Ms Plibersek on 4BC, also seemed shocked by what she had just said.
'What, are you saying he looks strange, he looks odd?' he asked.
'I am saying he looks a bit like Voldemort and we will see whether he can do what he promised he would do when he was last running for leader, which is smile more,' she said.
Mr Emerson said it sounded like she was attacking Mr Dutton over his looks.
'And if this last election taught us anything, it taught us that the Liberal Party has moved too far to the extremes of politics.'
'No, I am just saying he is not the warm and friendly face of the Liberal party,' she replied.
This idea of Dutton as Voldemort was also picked up by comic Jordan Shanks, aka "Firendly Jordies". He shared a video of a rather sad looking, now adult actor who played a young villain in the first movie. Looks like the dude was paid for it, prolly by Shanks himself. 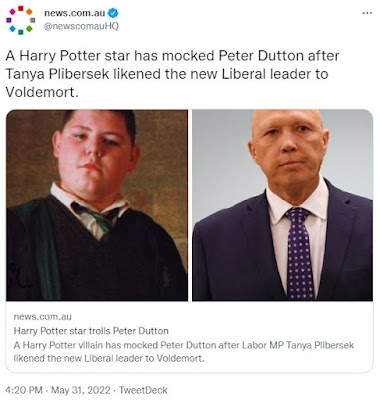 Watch it closely. He flat out says that Dutton is one of the Slytherin, and that he knows this secret.

Crabbe has a message for @PeterDutton_MP pic.twitter.com/gkfhwnO96d

Continuing the occult theme, the NSW Premier likened SkidMark McKaren to Tolkien's Gollum. The similarity to the Voldemort sledge was noted in the article below. 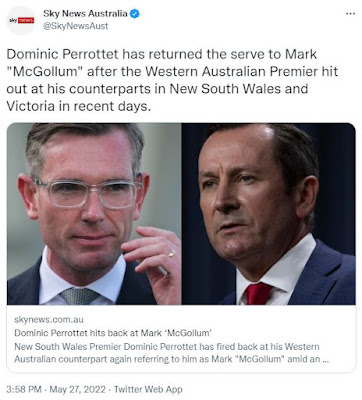 Another part of this pattern was this toon in the Sydney paper, which portrayed Albo himself as a character from the Harry Potter universe. 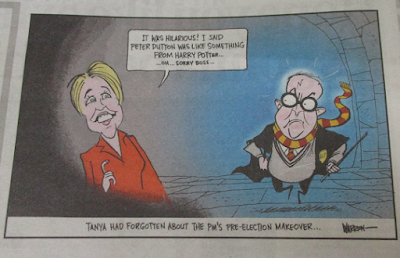 So, what's all this stuff about?
I reckon it's a sign that there's a grudge match between secret society wankers that's been going for a while and is now slowly bubbling up to the surface. It's like they're all hinting at the sinister shit they get up to to shimmy up the greasy obelisk.
It should be remembered that the first portrayal of this kind was in one of the Pauline Hanson toons. As I've described, the guys behind the hilarious series look like Masons themselves who are up with all the goss. Note the reference to horcruxes in the clip below.
I think we will see more and more of this kind of stuff in the MSM until the whole horrific culture of Canberra is finally exposed, (hog)warts and all.
If you appreciate these posts, please consider supporting me via Ko-fi. Aussies, know your rights!
Posted by MattHaydenAU at 1:50 PM