I'm sure you've seen those cartoons from Pauline Hanson's One Nation. They are hilarious. They also include a lot of red pills about the true culture of Canberra.

Take the latest episode. ScoMo saying lying is literally his "favourite thing to do" is actually the truth. He, like so many in the Australian political establishment, is a Freemason. While it seems that most members of this religion are fine people who just want to do good for their communities, the upper echelons are very different.

Those at the very top value deception extremely highly. It's their main MO. As well as being lying control freaks they are fully paid up, card carrying globalists. They may pretend to be patriots, but that's just so they can slowly trick the sheeple into accepting the New World Order. ScoMo letting the states inflict medical fascism on their citizens is a perfect example of this.

There are many high ranking Freemasons in the mainstream media as well as in politics. That's why you see so much of their symbolism in major outlets such as the Daily Telegraph. 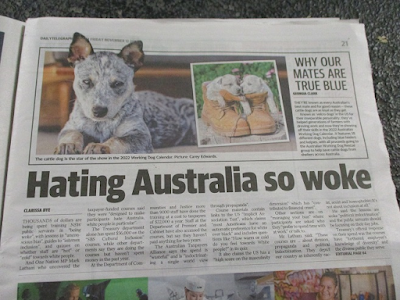 This page from the November 12 issue is a good example. It uses a trick they often employ, which is to place headlines and images from unrelated stories next to each other to suggest some message or theme to other globalists.

Notice how the dog is a blue heeler. They love that breed because it brings to mind Sirius, the dog star. Most readers would think that the headline "Why our mates our true blue" invokes a general kind of Aussie mateship, but the presence of this Masonic symbol suggests to me that the underlying message is actually to other secret society wankers. It's an exhortation to be loyal to each other. 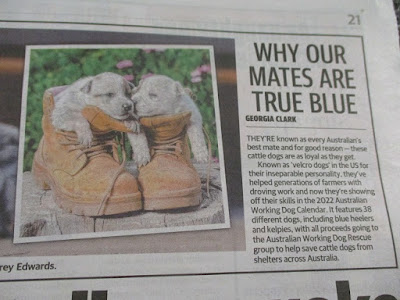 Then there are the puppies in the boots. This "double dog" motif is also very popular. I'm not sure why this is. Maybe it's got something to do with Sirius being a binary star. In any case you see it a lot.

They love their shoe and boot symbolism as well (check out the video below). And they're constantly equating puppies and other baby animals with kids which is also very creepy.

As you can see in the first photo above, the headline below the blue heeler story is about cultural Marxism in the public service. It describes how Mark Latham is arcing up about all the woke BS that staff are being indoctrinated with.

So, it seems to be dismissive of this politically correct attitude. But again, the proximity of the blue dog gives it the opposite meaning to "those in the know". The underlying implication is that hating Australia is actually a good thing.

Classic Janus-face subtext from these occultist arseholes. Lying -- it's literally their favourite thing to do.

Posted by MattHaydenAU at 12:39 PM