Now Jimmy Barnes has got the 'rona

Amazing how so many high profile people are coming down with the dreaded 'rona, now innit? In the political sphere Albo was laid low recently, as was ScoMo. And many famous folk in other fields are going into iso as well. Michael Rowland was one of them.

Now Jimmy Barnes says he caught it. And he claims to be in bed as a result. So this is not just about a test result. 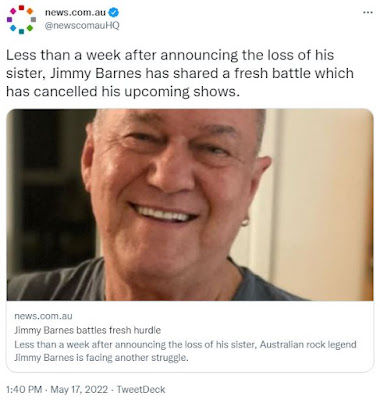 Sad that his sister has just died too. But even that is kind of intriguing given all the famous folk popping their clogs these days.

As the above article states, Barnes did claim to have gotten the syringe stab.

Well, if he did dinkum get it it wasn't very effecive now was it?

Or maybe the injection wasn't real after all. That's something I suspected at the time. I couldn't see how his management would have let him take the risk. (Made a video about it. It's embedded below.)

In any case I wouldn't be surprised if he really is sick. As we go into winter many people are falling ill. I've just been laid low myself for several days. I assume it was actually the 'rona but it could have just been the flu. I didn't get a test because these are so obviously flawed. I'm just glad I went through the process and now have antibodies. (It was the first time I've been sick in almost three years, BTW. Amazing given the "once in a hundred year pandemic" and me being one of the selfish unjabbed now innit? You'd think I would have carked long ago.)

That said, I still find the high number of blue checks being laid low presently pretty suss. There seems to be something else going on in the shadows. Hopefully it's related to the Cabal being taken down.

Whatever's behind this phenomenon one thing's for sure: The MSM narrative is not even close to the real story.

Posted by MattHaydenAU at 1:39 PM