Yes, the devil is in the detail, and the layout

I know that some people have come to doubt my sanity due to my belief that mainstream media outlets are sending coded messages to a select group of people via symbolism and wordplay in their stories. Well, for those who think I need to take my meds and have a good lie down I'll offer you an example that might convince you I'm actually onto something after all.

But first, some context: One thing I've realized is that when it comes to newspapers, the layout is extremely important. The way to see what the occult elite who own and control the MSM are actually up to is to look at each page or spread zif it's a painting and you're an art critic. Then you start to see patterns that are invisible to the vast majority of other readers, who actually believe the foundational claim about journalists fearlessly supplying information that they need to know. So they take in each little section independently and don't join the dots, so to speak.

If you apply your arty wanker eye to the big dailies you'll soon realize that subtextual meaning is regularly conveyed from the combination of symbolism and wordplay in seemingly unrelated stories in the same issue, often on the same page. The occultist flogs who run the Failing Terrorgraph absolutely love this trick and frequently use it on their covers. Here's a good illo related to Shane Warne. Please check it out.

With that in mind, consider this. 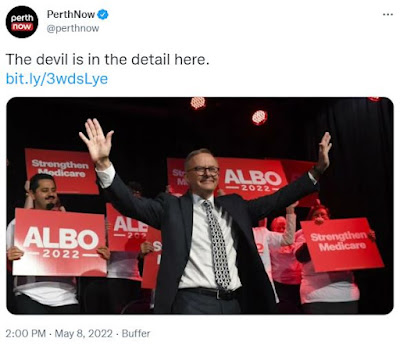 It's a tweet update for a story on the dopey ALP leader from Perth Now, another fake news factory that almost certainly has an obelisk-fondling zombie at the helm.
The article itself is about a speech Albo gave, and includes what look like Masonic references. For example, he mentions rock stars Keef and Mick:
“People know all about Scott Morrison. They’ve worked him out.
“The truth is, only the Rolling Stones ever got away with asking us to have sympathy for the devil and he is certainly no Jagger or Richards.”
As Elon reminded us, the Freemasons started out as a stone cutting guild. So this could well be an appeal to a certain section of the secret society.
He added:
“Coming out of COVID, Australia needs to learn the lessons of the pandemic. We need to stand on our own two feet.”
Given how much they love their shoe, boot and foot symbolism, that looks like more of the same sort of signalling from Albo himself.
Remember also that those on the highest levels of the secret society do dinkum worship Lucifer. Which is why I think that oft-used quote comprised the headline.
Now, even if you think those observations are BS, consider this:
The phrase "the devil is in the detail" was also invoked in the headline of a recent story in the Sydney rag that was not related to Albo content-wise but was placed right next to a piece about him tryna impersonate James Bond, but looking more like Austin Powers.
As I often say in blog posts and videos: What are the odds?
The placement of that phrase, which I describe in the video below, was clearly not the result of chance. It was intentionally put there to complement the Albo spy story, thus confirming my layout theory.

Posted by MattHaydenAU at 7:31 PM