ScoMo the bulldozer hit that kid on purpose

If you watch the video of ScoMo ploughing into that kid in the soccer match in Tasmania it doesn't really seem like an accident. It actually looks like he went out of his way to collide with that particular player.

And I think this was the case. So why would he do such a thing?

Well, turns out that the kid's name is Luca. That is reminiscent of Lucifer. So the clumsy collision was meant to help ScoMo achieve what ever he's been tasked with doing (and I actually don't think that is to win the election, BTW).

Yeah, I know that sounds too batshit to be true but I do think that's what was going on. ScoMo is a high ranking Freemason. So tackling a kid with a name reminiscent of the "Big Guy" would qualify as some sort of symbolic incantation. Perhaps it was an answer to Albo's speech in Tasmania which referenced the devil?

The occultist flogs at the Failing Terrorgraph love to pepper its headlines with that kind of imagery. As well as constant references to demons, hell, and evil they allude to Lucifer when they can. Stories featuring kids with names like Lucy, Luca, Lucas, and Lucio seem to appear inordinately often in their pages.

As mentioned, the West Australian also uses a lot of occult elite symbolism. The editor clearly knows what's driving the "great and the good" of Canberra because he too is a secret society wanker.

That's why this cover was notable. 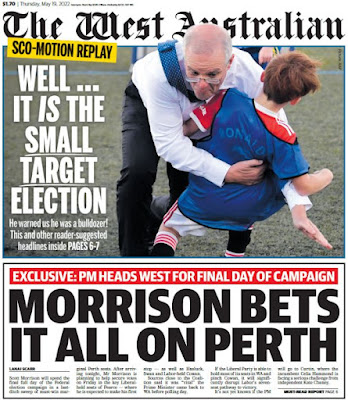 "Small target." Exactly. Him ploughing into that kid was intentional. The paper's editor knew this and was telling his creepy mates.

The Sydney rag used exactly the same term to describe Albo in an issue from late March. Note how the headline of the entire spread included the words "high stakes". Given the recurring rock spider vibe in that lie factory, I suspect the allusion was actually to a drug high and steaks. Yeah, it's that twisted. 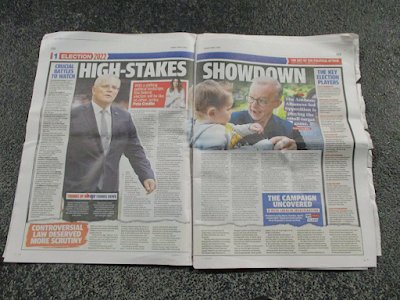 The "small target" line is in the quote from Credlin. As well as the presence of the child, I think a reason it's next to that photo is because of "game". They have repeatedly used the phrase "kids back in the game". Replace in with on and the sense changes entirely. 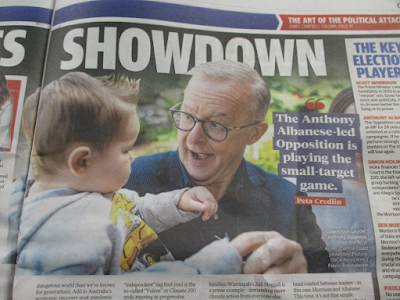 If you think that I'm reading too much into this stuff consider another cover from the Perth paper. Note how at the top there's a reference to the number of seconds Albo lasted before scuttling off. 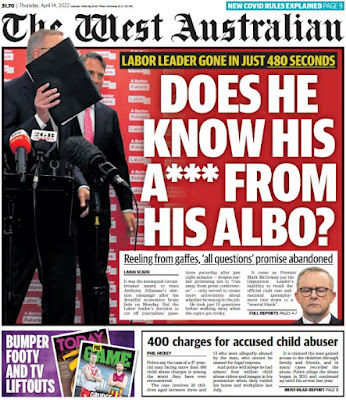 Now check out at the story on the bottom. It references a similar number, 400. This is clearly a sign to those in the know that there's a thematic association being made between the two items.

Look closely at the photo of Albo. Note the two words directly underneath it. Think that was a coincidence? Piss off!

Back to the Failing Terrorgraph. This was from the April 3 issue. On the face of it "battlers" refers to the voters, obviously. But I actually think the hidden meaning is that it describes the pollies themselves. Perhaps it implies they are "bottlers" (of "fuel") instead? 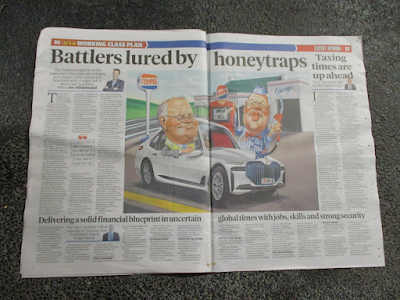 IMO the hint for those in the know is that our "leaders" have been lured by honey traps that include "small targets". Whether this is actually true or not I have no idea. But I'm sure that is what's intended and here's another element in that toon that makes me say so. 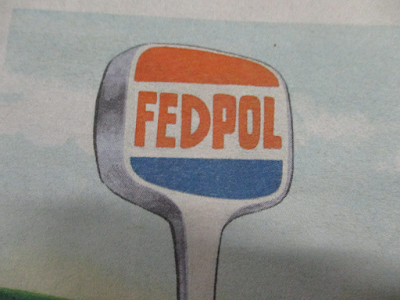 Take the first and last letters out of that word, rearrange the remaining letters and look what you come up with.

See what they're doing?

Again, if you think that's just another coincidence you must be some kind of moron. Given how much creepy wordplay is in this paper there's no way that was there by chance.

It's as likely as Scomo running into that kid on the soccer field purely by accident. The MSM head honchos all know that. Rather than tell their audiences they magnify the lie. These people are all part of the same evil club and they get off on publicly reminding each other of this in front of millions who are none the wiser.

Posted by MattHaydenAU at 2:11 PM