Fake news telegraphing that Betty Windsor is no more?

Lately there's been a lot of talk about Queen Elizabeth's impending death. There was that controversy over David Hurley foreshadowing it on the radio. And many noted the bizarre sight of people waving at a hologram version of her during the Platinum Jubilee, among other things.

In this context, I thought these recent pages in the Failing Terrorgraph were interesting. The local lie factory has form for using the covers in particular for creating subtextual messages from the combination of the two main stories.

Check this out from June 3. 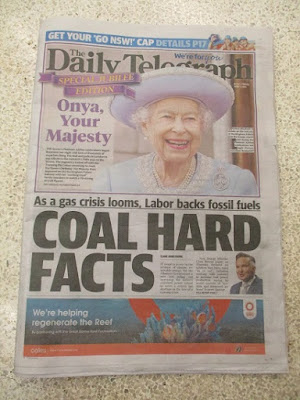 Are they implying that it's a cold hard fact that Betty Windsor is now a fossil? Maybe.

Then there was this from the June 6 issue. They've been doing a lot of associating between the colour blue and the royals lately. It's all about the blue blood, you see.

They've also been flogging the extravabazza that is the flick Elvis. The legendary singer was well known as the The King, of course. They've been using that term repeatedly. 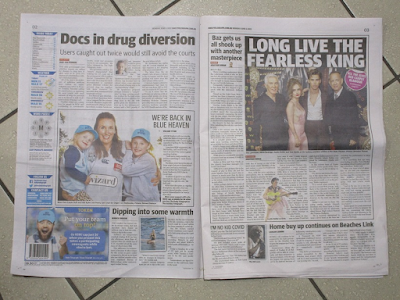 So, in the spread above you have the idea of a woman in blue going to heaven next to a variation on that oft-used phrase related to royal succession.

Possible translation: "The Queen is dead. Long live the King!"

Then there was this, from two days beforehand. 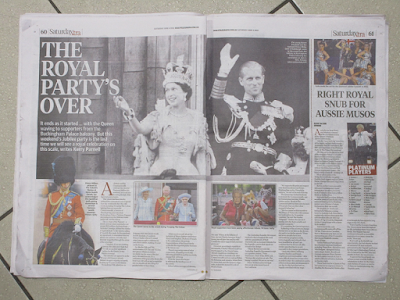 As with so many of their headlines, there are multiple subtextual meanings. I think the party angle might refer to a certain pink drug that dare not speak its name.

It also has a more general vibe of finality, which could be another hint about the current state of health of dear old Aunty Elizabeth ...

There were similar data points from a while ago. Thoughts on these are in the video below. As usual I speculated wildly but I think I was warm on what they were tryna convey to their creepy mates.

Posted by MattHaydenAU at 1:51 PM