No doubt that this year's federal election is one of the most lacklustre ever. That's mainly because it's primarily between two parties with an arrogant disdain for the electorate, whom they are convinced don't know what's good for them and need to be gently but firmly herded like sheep.

Labor and the LNP, along with the MSM, have managed to keep the whole, er, "debate" on safe, anodyne, politically correct territory. They've both wheeled out numerous cliches, motherhood statements and vague plans (about the economy, mainly), while trying to avoid grappling with thornier issues such as the rise of Islamism, same sex marriage, nanny statism and freedom of speech. There's no doubt that these are becoming increasingly significant for growing numbers of Aussies.

You can definitely see that with the rise of minor parties, who will make their presence felt mostly in the Senate. They're all a bit different, sure. But several of them have a common thread of resistance to being told what to do, think, and feel by a bunch of excruciatingly right-on finger-wagging arsehats who've mostly never had real jobs. 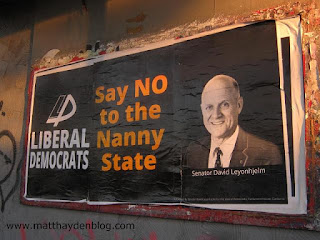 There hasn't been much MSM oxygen given to these parties -- especially the Australian Liberty Alliance. So people do need to do a bit of searching to understand what they're truly about. But that is definitely happening, particularly on social media. And I think the political establishment is gonna be in for a rude shock.

Still, even if they get one, I doubt they'll learn anything from it. In the coming months -- just as in the recent past -- it will be business as usual for the Coles and Woolies of Oz politics, who have had their two most underwhelming leaders in recent memory.

Both Turnbull and Shorten do try to convince us they have political fire in the belly with some crap acting now and then. But it's pretty clear they are both brazen opportunists driven more by personal ambition than anything else.

Sure, Shorten and his cynical spin-meisters have managed to conjure up a totally fake issue -- that of Medicare being at risk of death under the LNP. It's complete and utter bollocks and the fact that they've tried it on says heaps about Labor culture now. It really is a massive, putrid lie. Yet the whole team is on board, shamelessly repeating it!

Dubbed "Mediscare" it's gotta be among most pathetic political ploys in this nation's history. Whoever created it should be sent to the salt mines for the term of his natural life! While it has managed to put the wind up some voters I don't think it will have a big effect on the outcome. And it will be seen by all but the most pathetically rusted on Labor voters as yet more evidence that this once great party has well and truly lost its soul.

So, basically it looks like Turnbull is gonna creep over the line. But that's not because of anything he himself has done. Rather it's because of all the hard work of Tony Abbott -- the bloke Turnbull so cruelly knifed and has been trash talking the whole time. It's all quite nauseating, really ...
Posted by MattHaydenAU at 11:58 AM