As mentioned previously, the upper echelons of the political establishment and MSM in this country are big time secret society wankers. They really do worship Lucifer. They enjoy showing their love of chaos being inflicted on the normies, because that's how they get their treasured order.

ScoMo and Albo are high ranking Freemasons without a doubt. That's why they drop sinister sulfur-smelling references into their speeches, etc.

Here's another little example from Albo, when he was desperately tryna look like an everyman at a barbie in Perth. Out of the blue he casually mentioned how he got his sausage wrangling skills at "Marrickville Red Devils". See for yourself.

Labor leader @AlboMP says onions are a key part of the bbq. Asked how much sausages cost he replied “here - free” @westaustralian pic.twitter.com/zDn9Sa7Mdf

The up themselves twats who run tragic fake news factories like the Sunday Times are also massive obelisk fondlers and they do heaps of sly signalling about how they wanna create a hell on Earth because then they and their creepy mates get to run everything. That really is the plan.

Take this cover, for example. It portrays the poor brainwashed normies of Western Australia basically chanting "hell, yeah!" to the election -- sorry, installment -- of this odious operative who flat out portrayed himself as a spy in another globalist-owned wank-mag only recently. 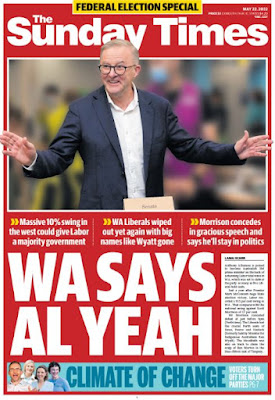 Albo, the special needs gimp-weasel with big time mummy issues, would never have gotten where he is without the help of his secret society mates.
FFS, surely even rusted-on Labor types cringe every time they think of this dopey non-entity with absolutely zero charisma "leading" their party!
But the occultist flogs in the totally corrupt MSM are gonna pump the loathsome little loser's tyres like there's no tomorrow. And that includes dropping in references to hell, demons, and evil whenever they can.
Keep an (illuminati) eye out for more of this, people. It's what they're doing. And they certainly have form for it.
And just for a bit of variety, here's another example of what I would call surreptitious Seurat-style Satanic symbolism from Sydney's biggest selling fear-pawn rag.
There's a story about the vibe in a coal mining area just before the election. Pretty run of the mill stuff. But look closely at the photo of the chick doing the dude's hair. Not only does her top feature the classic exposed shoe sole so beloved by the occultist flogs at the Failing Terrorgraph, note how her hand echoes the logo in the Monster Energy drink ad on the screen directly behind her. 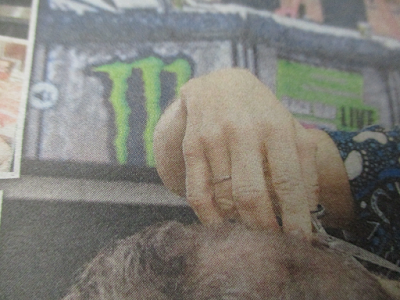 That brand exhorts consumers to "unleash the beast". And there's a real rabbit hole to do with those three claws and how they're meant to evoke that ol' Masonic fave, the 666.

There is no way that is a coincidence. It's clearly some sort of batshit symbolic incantation.

I see this kind of stuff all the time. I'm collating it so you can see that it's a real thing.

If you keep looking at what's in the news zif it's all just information you'll always process it in blocks and be unaware of all the creepy comms and hints included in it by association. But look at each page zif it's a painting, join the dots therein and you'll start to see the real picture they're conveying to their creepy mates. It's quite unsettling because you will see it all through the MSM and elsewhere besides.

Some say that this is inconsequential but it's actually very important. Putting this kind of stuff into the "news" is clearly a very high priority for the editors. It shows that their foundational claim about being motivated by the desire to inform you, their valued readers, with fearless truth-seeking journalism is total bollocks. That is, they are using the work of their reporters (whom I suspect are mostly none the wiser themselves) for a very different purpose to the one that you understand it to be. It's a massive deception they carry out constantly.

Remaining wilfully ignorant of this agenda is stupid beyond words. It would be like going to your favourite restaurant for years on end, thinking that the chef really values his clintele. Then you learn that he's just been sprung jiggling his wedding tackle in the custard and there's even video of him doing it.

Are you gonna keep going there and guzzling the food like you used to, or accept that he's a disgusting creep who's been secretly mocking you for ages and never go back?

If you keep reading the news like you used to after realizing this is the kind of creepy stuff they drop in all the time, you deserve all the shit that's coming to you from the globalist occult elite. They have total contempt for you, believe me.

To those credulous numpties I say: Have fun defending the Luciferian low-lifes as they continue to mock you in increasingly obvious ways. Keep on suckin', suckers!

Posted by MattHaydenAU at 1:42 PM