The young blood "fountain of youth" is a thing after all!

If you've been reading this blog for a while, you'll know I have a crazy conspiracy theory about how there's a massive hidden trade in adrenalized blood, and that the Cabal-owned and controlled MSM are constantly alluding to it symbolically.

I understand why some people think this makes me certifiably crazy. Hell, I would've thought so myself a coupla years ago.

But there are just so many examples of this pattern, I'm convinced it's a thing. And here's something else that lends weight to my theory. It's a tweet thread from the Telegraph in the UK. 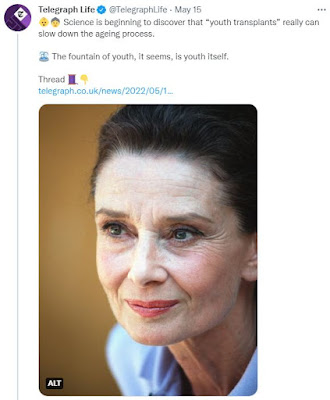 It describes the rejuvenating properies of "young blood". Note the pinky-purple swimsuit. This and similar colours are strongly associated with the drug that dare not speak its name, produced on an industrial scale from the blood of terrified kids. 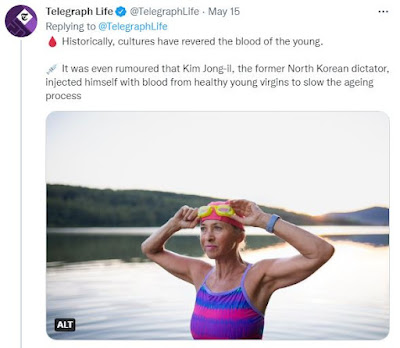 It mentions how such a trade is the stuff of horror movies. I think this is their way of hinting that the horror is real. 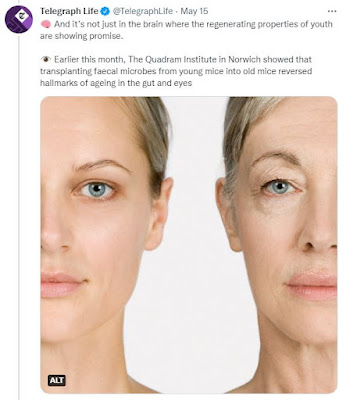 There's that pinky-purple colour again. Note also the love heart-shaped lenses. Even though the old duck is meant to be a hundred not out, these are reminscent of the pair Sue Lyon wore in Lolita. 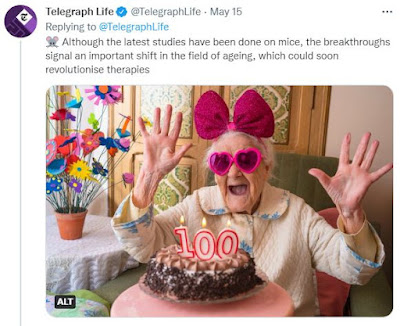 Bono is often photographed in similarly tinted sunnies. I've seen Elton John and other rock stars wearing them too. I wonder why that is?

The bow on her head is also reminscent of rabbit ears. This is used to symbolize the drug created from this adrenalized blood. And the cake is covered in chocolate. Maybe that is meant to be symbolic as well.

IMO this thread is an example of the MSM signalling to their creepy mates that this trade does actually exist already, and perhaps to start to prepare the masses for revelations regarding it. Maybe they're tryna make the whole concept seem a bit less creepy and wrong -- not unlike their obvious pedo-normalization attempts.

Now that you can see this is a thing, and that it's being openly described in the MSM, please check out the submerged symbolism identified in the video below. You'll see, it's clearly what they're doing.

The whole system we live in has long been controlled from on high by the most disgusting, depraved, evil people. And in an oblique way they've been telling us what they've been up to the whole time.

Time to wake up if you haven't already!