It's the Greens' fault that lefties have no self-awareness

As the fires continue to rage across Australia and it becomes increasingly obvious to any sane adult that arson and massive ground fuel loads are the main causes of them greenies and lefties are getting worried. They are starting to realize that people are not buying their "climate emergency" narrative anymore, even though the MSM keeps dutifully cranking it out round the clock.

If they had any self-awareness they would start to suspect that maybe their own behaviour might have had something to do with this. But being the obnoxious narcissists they are, they haven't even started to do that.

They just do what they always do: double down and deny any responsibility. The hashtag #ItsTheGreensFault is an example of this.

It was quite obvious from the get-go that some sneering hipster created it, thinking it would be a winner for the party of SHY, Bandt and DiNatale. It would give the Twitter trollective an opportunity to sarcastically put down the "climate change denialists" and thereby enforce warmist goodthink as well as point tweeps to articles about how Greens activism over many years had not resulted in an absolutely massive ground fuel load, as widely believed.

But the problem with that strategy is that trust in the mainstream media is collapsing by the day. More and more normies are doing their own thinking and joining the dots. They are waking up to the terrible truth that this whole crisis is a yuge psyop. The Greens (and globalist, warmist major parties to a lesser degree) are a big part of the set-up. Arsonists are the direct cause. And the MSM's role is to push the "climate emergency" BS. This multi-pronged approach just doesn't fool the majority anymore.

So it backfired on them. Lots of Aussie tweeps used the hashtag unironically, causing further consternation.

Alexandra lives in the country. She knows what she's taking about. Greens are to blame, and everyone there knows it. And they are filthy mad about it.

Also, the fact that so many greenies and their fellow travellers were joking when using this hashtag was revealing in itself.

I mean, FFS. Just look at these puerile offerings.

These jokers are always quacking on about how much they care for flora, fauna, and humanity yet as the lethal firestorms continued to rage across the nation they made these smug, snarky little quips. Yet again, they proved the point that conservatives like Andrew Bolt keep making: they're more callous than compassionate.

And I'm sure it's not just rusted-on righties who can see this. Many political fence-sitters are no doubt alarmed by their pettiness, puerility and indifference to suffering as well.

When I tweeted on the subject, I got a lot of snarky responses. But almost all of them were witless personal attacks. Not one was anywhere near being an actual counter-argument. 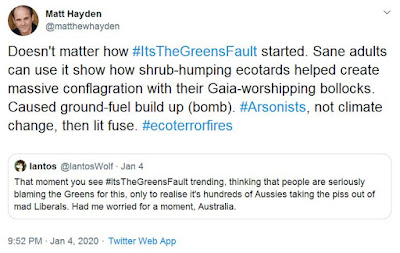 I'm sure none of the bong-suckling ferals at Extinction Rebellion demos who glue themselves to roads are climate science and forestry management experts either. Would this person give them the same advice?

#ItsTheGreensFault this cuddly little critter can't see the irony of invoking the cognitively challenged -- surely an oppressed, marginalized minority deserving of compassion -- as somehow defective in an ad hom attack on an opponent, rather than address the substance of his tweet.

#ItsTheGreensFault that dopey John Birmingham thinks that saying someone can't get laid is a clever retort when it's the oldest, laziest and dumbest one in the book.

Using bestial imagery to try and belittle someone critical of the Greens is prolly not such a good idea given that a prominent party member was "philosopher" Peter Singer, an animal rights advocate and defender of zoophilia.

I thought these two comebacks were the most revealing of all. The first looks very much like projection, and the second a kind of approval of arson.

All these malignant, retarded responses add weight to the point I was making in this video.