I find it fascinating that the usual suspects desperately want to change the date of Australia Day. The whole celebration is already politically correct as all get out. This has been the result of decades of meddling by the globalist elites, particularly through the United Nations. Don't think it's OTT to say that this nation is a democracy in name only.

I wandered down to Circular Quay during the arvo to have a look at what was going on. It was a great atmosphere with lots of families about -- and from all ethnic groups, just like on NYE -- yet the divisive effect of identity politics was clear.

Fact that there were two flags on the Coat Hanger was prolly the most obvious example. Also, heaps of people were carrying both flags themselves. I didn't actually see where they acquired them but it seemed that they were handed out in pairs. 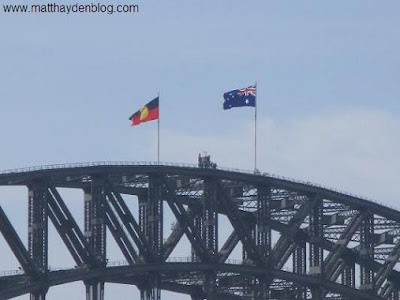 This whole idea of an Aboriginal nation, distinct from the rest of the country, is already well advanced with a lot of powerful interests behind it. And they're really focusing on constitutional recognition now which will have even more divisive effects if it succeeds.

Seems odd that there's such a push to "change the date". Why not have a separate day labelled Indigenous Australia Day, or something like it? (Actually they've prolly got something like this going on anyway, or at least a campaign to realize it.)

This is what's so absurd about the whole Aboriginal flag thing. The Indigenous activists want to be part of Australia Day, but separate at the same time. But while being separate, they also want to dictate what date the whole celebration -- well, actually a "day of mourning" -- is held ... WTF?

As well as annoying the crap out of everyone it's not exactly a consistent position ...

But back to what was going on at the event itself: There was a floating screen that, among other things, showed clips on the theme of what's great about Australia.

A dude heavily into drag was featured in one segment. 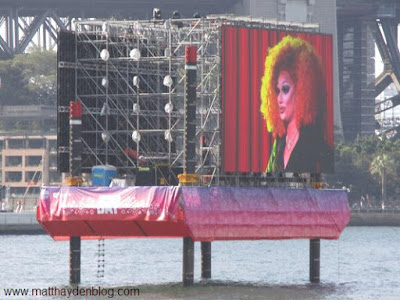 Well of course, this truly defines our nation, dunnit? The toxic masculinity of Aussie blokedom is just not who we are anymore, is it? Today's males are all so in touch with their feminine sides they actually frock up, and prance around in pubs and clubs -- or read woke fairy tales to the kiddies in libraries. Goodbye Crocodile Dundee; hello Priscilla, Queen of the Desert! FFS.

Though I shouldn't be too judgemental. There was also a video about a dude who looked a bit more "cis-het" than the drag queen. He was best mates with a bunch of koalas. 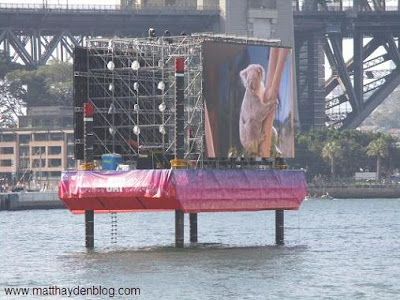 So, that seems to be the cultural trend these days. You can still be a blokey bloke, but only if you cuddle critters and help save the planet!

Those were the only two clips I saw. But I can imagine what the others were like. Bet it was the usual fare about how chicks are all "doing it for themselves" now, kicking arse in business, while simultaneously demanding "safe spaces" free from all the boy germs, etc.

Speaking of safe spaces: As is usual these days at these big events, security was paramount. 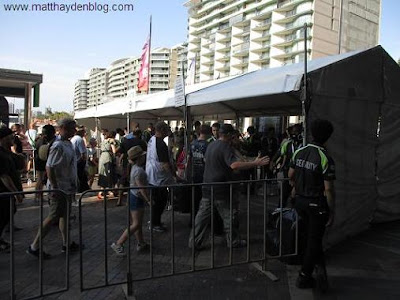 All bags were checked for booze and potential weapons at two gates on both sides of Circular Quay. And for a couple of years now there have been bollards all around the roads leading into the area to prevent vehicular terrorism.

Obviously such measures are crucial. And I'm sure similar ones were taken decades ago, before all this divisive multi-culti stuff had really kicked in. But I'll bet they were nowhere near as severe. Back in the eighties I suspect the main potential threat revellers faced was being chundered on during the rock concert out the front of the Opera House. They certainly weren't worried about being knifed or run over by some loon yelling "Allahu Akbar!".

It's depressing that so many of our freedoms are being curtailed, and "for our own safety". Our politicians have no choice. But then they are also the ones who have helped create this mess because they have let the globalist elites meddle with the make-up and culture of our country.

One of the main ways they've done this is to encourage a sense of victimhood within various ethnic and cultural groups -- Aborigines in particular. This divisive, fear-based ideology is promoted as empowering, but it's actually the opposite. Countless people live in a mental prison as a result.

So sad, but also ironic. We started out as a penal colony, after all.