In the wake of the catastrophic bushfires PC lefties have complained that ScoMo should be decisive and show leadership in the face of the (non-existent) threat of climate change. Because he's been restrained and rational in his response to this issue they've shrieked up a storm.

And now, when there is a dinkum global threat in the form of a fricken coronavirus pandemic, and he does make a couple of big, hard calls (stopping arrivals from China; setting up a quarantine on Christmas Island) they're enraged about that, too!

Shows the sad extent to which they've been brainwashed with cultural Marxism. It really is a total mind-control system that makes them value feels over facts; virtue signalling over logical analysis. You see its toxic effect all through the MSM -- particularly in their ABC.

Take Nick here. He reckons we should aspire to be like the virus itself! 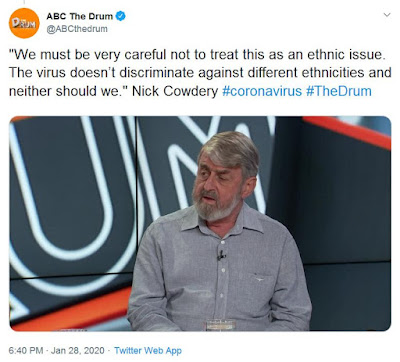 Yeah, I know what he was getting at ... But who was suggesting that ethnicity should be targeted? It's where  people have been geographically that's the key issue, since China is where the coronavirus originated. So it's rational, not racist to be most concerned about people arriving from there.

But that's The Drum for ya! If you don't say something daft and sanctimonious, you don't get asked back. So I shouldn't be too harsh on him ... Next episode, one of their regulars'll prolly recommend that the coronavirus be appointed Head of the HRC. (Hmm. Actually, not such a bad idea. Be less nauseating than its predecessors.)

Not remotely funny. And WTF was he trying to say? Even most lefties would think this was a piss-poor effort, I reckon.

Of course the hand-wringers pounced on the choice of Christmas Island for the quarantine since it's such a powerful symbol of oppression for them. 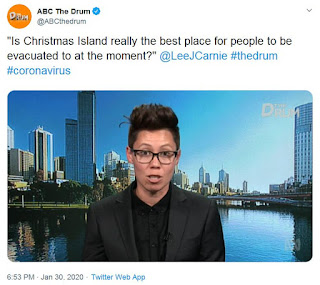 Hmm. Perhaps not ... I suggest all who've been in Wuhan get locked in the studio where The Drum is filmed. Panellists suffer from a PC mind virus so powerful it'd prolly devour the coronavirus in 10 seconds flat!

Sure, patients would become robodolts as a result but the cure is quick as, and all would survive, right?

Most of the PC posturing about Christmas Island has been about its general inappropriateness. But some of it has been balls-out race-baiting. 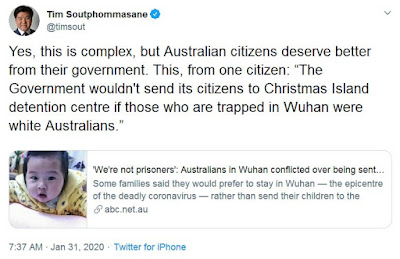 Obviously most people who end up in this quarantine are not whitey-tighties because of the location of the outbreak. Race has got nothing to do with it.

In any case, at least one of them who was offered this option is of European descent. He's a dude called Rui Severini. I suspect there are several others -- prolly even including a few Anglos.

So Tim and Osman's nasty and opportunistic insinuations are easily debunked, as usual.

Posted by MattHaydenAU at 8:09 AM