We all know that PC lefties suffer greatly from arrested development. Like spoiled sprogs, they remain emotionally incontinent their entire "adult" lives. They are also wildly overconfident in their own child-brained perception of the world and how it works. In observing pretty much any issue, they think they've got it all completely sussed; that only their view is correct; and that all others are not just wrong, but wrong as.

So they always know what the "game" is, so to speak, and that their opponents are all clueless idiots who don't know its rules or massive cheats if they do. They also believe that it's always a "zero sum game". That is, if someone's "winning", they must be doing so at the commensurate expense of someone else.

A sanctimonious little Twitter outburst from Jane Caro illustrates this bizarre psychological quirk, among other things. Basically, she openly bragged about how she was jetting all over the eastern states to various meaningless jawfests, including a "Climate Emergency Summit"! Journalist Michael Smith pointed out the blatant hypocrisy of this behaviour. 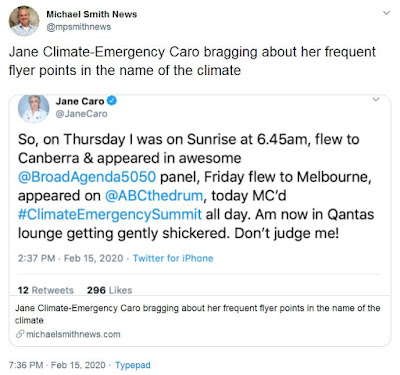 She got wind of the post and responded sneeringly:

So much you could say about such a self-parodic retort, but I'll just focus on how she applies the zero sum concept. Firstly, she believes her warmist view is unquestionably valid, so anyone who doesn't accept it is a bad person, a "denier".

Applying her daft, discredited theory she concedes that she is contributing to the severity of this "climate emergency". But that's totes okay because she is cancelling absolutely all of that out and then some by co-owning a sizeable farm full of carbon-guzzling eucalypts. So confident is she that she has "won the game" that she proudly declares victory and even rubs it in by asking what Smith himself is doing to save the planet. (Not surprising that she would double down so defiantly. It's what they always do, after all.)

Also not surprising is the fact that she has used this tactic before. The criticism clearly rankles, so she's clearly spent some time developing and honing her self-defence and subsequent counter-attack. 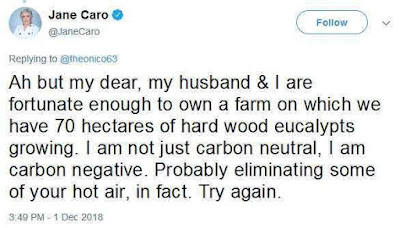 These leftie warmists are so predictable, eh? Speaking of which, it's almost inevitable these days that PC lefties will eat their own. And that is exactly what happened to Caro, with this SJW throwing shade on her for being indifferent to the pain she's causing to Indigenous folk with her appalling ownership of Aboriginal land. This attack is motivated in major part by this "zero sum game" concept as well. 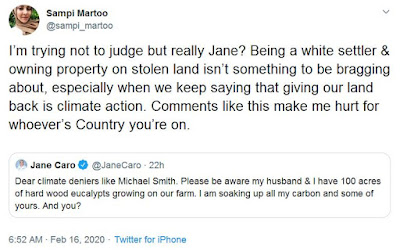 Of course any sensible, sane adult would avoid the pitfalls that the jet-setting doomsayer and feisty feminist farm-owner has fallen into here. Applying "Caro-Dynamics" is always a plane-wreck for sure!

But these PC lefties never learn. They all believe it's fine to be an obnoxious -- even destructive and violent -- arsehat, as long as you feel that you're doing something to save the planet in the end.

IMO this deep-seated belief is one of the reasons it's quite plausible that deep green activists were behind at least some of the arson attacks that made the recent bushfires so catastrophic. That's something I elaborate on here:

Posted by MattHaydenAU at 12:50 PM