There's a famous quote by dirty Democrat fixer Rahm Emanuel that I'm sure you've all heard. He said "you never want a crisis to go to waste".

Makes perfect sense, dunnit? After all, when everything is in a state of flux and the usual checks and balances don't apply you can often, er, Rahm through heaps of stuff you otherwise could not.

It's not exactly a revelation that people in politics would think this way, of course. But I suspect the line is so well known because it's such a brazen, clear endorsement of cynical opportunism.

That's why I think this article by Malcolm Turnbull is so notable. He's explicitly echoing Emanuel's wording, not just his sentiment. 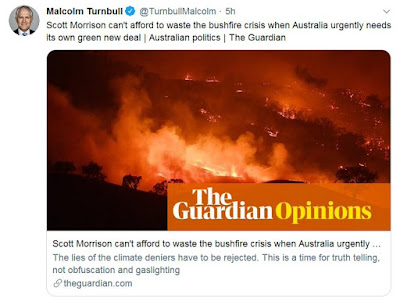 He's presenting his exhortation to ScoMo as an overwhelmingly good, compassionate, ethical thing to do, natch. There's no mention of how he and his mates have invested so much money in renewables, not to mention all the creepy top-down cultural control that a "green new deal" would afford.

The Miserable Ghost wasn't the only one aggressively applying Emanuel's maxim during the current crisis. Among others, Anthony Albanese has milked the disaster in various ways, including feeding fireys for MSM exposure.

And in an ultra-cynical move he suggested making the first day of Parliament one of mourning. Such brazen virtue signalling was clearly designed to draw attention to himself, and make him seem totes big-hearted. Gawd, what a sanctimonious squeezer ...

He also knows that ScoMo is almost certain to reject the suggestion in favour of just getting back to work. Then Albo and his fellow opportunists in Labor can puff themselves up with faux indignation and wail about how heartless he is. As nauseating as it is predictable.

He likes to think of himself as a no-nonsense straight-talker. But it's obvious to anyone with any sense that he's as devious and calculating as they come -- just another brazen opportunist exploiting human suffering for his own ends.

Speaking of which, Christine Milne is also seizing on this disaster to push for a radical restructuring of the Australian economy and society. 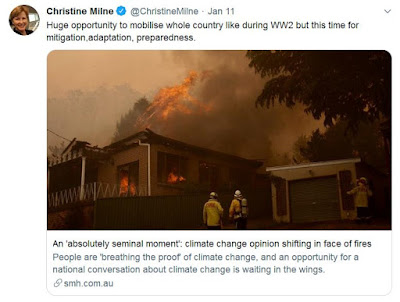 Fascinating that she invokes militarism given that she's spent so many years proclaiming her pacifism. As well as showing her up as a massive fake, the tweet also gives an insight into her deeply misanthropic mindset.

If this disaster is like WW2, and we must take this "huge opportunity to mobilise the whole country" then who is the equivalent of the Axis powers led by Hitler?

Hmm. Well, it's just us, innit? You know, the millions of normies who use eeevil fossil fuels to power our lives, thereby creating this "climate emergency" ...

So, she's basically declaring war on humanity. But don't worry, it's not like she's a dangerous extremist or anything. She's a nice little lady who truly cares. And she only wants the best for us -- no, really she does!