Amazing to watch how extreme the globalist warmists -- the Greens in particular -- are becoming in their relentless campaign to dominate the narrative re the Australian bushfires. They are certainly applying the "wisdom" of Rahm Emanuel and taking it as far as it can go.

Alinsky is also a source of tactical "inspiration" for them. Remember, he said: "Pick the target, freeze it, personalize it, and polarize it." That target is definitely ScoMo. They're attacking him in an even more ferocious, sustained and personal way than they did Tony Abbott, which is saying something.

Also OTT, even for them, is the way they are claiming Scott Morrison is directly responsible for the fires. While much of the rhetoric is about wanting him gone from his position as PM (eg, #SackScomo) some of it clearly borders on calling for his assassination. 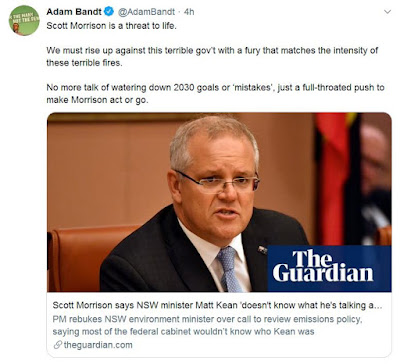 "We must rise up against this terrible gov't with a fury that matches these terrible fires." Gawd. They were lethal, remember.

And notice how the flames in Bandt's violent exhortation are invoked in a positive way, as a solution. He clearly sees this fire as righteous and purifying like "fire in the belly". He and his fellow travellers actually love fire because it is so destructive to the environment. It's a powerful narrative weapon; prolly the best tool they've used so far in demonizing their foes.

That's something to remember when you think of the extremely high number of arson attacks this year. Greenies have desperately been tryna pour cold water on the idea that so many were intentionally lit. Yet they have also constantly invoked this idea when blaming the Government. Remember how Jordon Steele-John pretty much labelled them arsonists back in November, even before the flood of firebuggery was clear.

Then there are all the lefties on social media constantly accusing the LNP and their supporters of lighting fires. This progressive pussy's tweets are typical. 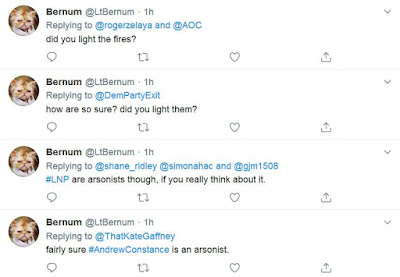 He's clearly really fired up about this issue and appears to live in the country. (Love the name, too, BTW: "Bernum".) 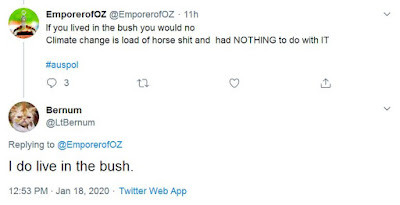 It may well be that the feral twat behind this account isn't a politically motivated firebug himself. But there are surely many other idiots out there who share his psychological profile. They are as hateful as they are stupid and if they think they can do their bit for the noble cause of "saving the planet" by lighting fires (or maybe getting their kids to do it) then blaming them on "#SmoKo", why the hell wouldn't they?

Such "crazy brave" acts would make them feel clever and virtuous at the same time. And any guilt they may feel would be assuaged by the belief that the ends justifies the means. Social justice warriors always project, as we all know. 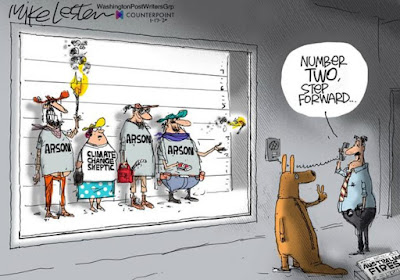 And there are plenty of those in the MSM as well. They are another kind of useful idiot. Not only are they downplaying arson and ground fuel build-up as contributing factors, they are calling anyone who says they were the main cause bots, trolls and disinfo agents.

They are clearly terrified of this counter-narrative. But rather than see sense, grow a spine and actually do some real journalism, they prefer to double down on their climate change narrative instead. Hardly a sustainable strategy long term ...

Posted by MattHaydenAU at 1:10 PM