Is green globalist Clover Moore trying to tell us something?

I've become increasingly interested in symbolism in recent months. This has mainly been due to following the whole Q phenomenon. One of this mysterious Trump-connected insider's favourite phrases is "their symbolism will be their downfall".

And the people he's talking about are the globalist Cabal. These are the super-rich and powerful movers and shakers who have been controlling the world from the shadows for ages. They are forever dodgying up events to con the normies into believing their bollocks so that they can fleece them big time and manipulate them en masse, often simultaneously.

Their ultimate long term goal is to create a one world government or "New World Order". They have favourite symbols associated with the many institutions, companies, and even political parties that they control. One of these is the pyramid. You'll often see it with the "Eye of Providence" at the top, although not always.

The whole climate change scam is perhaps the biggest psyop they've been running. So it's not surprising that you see their symbolism in the Greens logo. 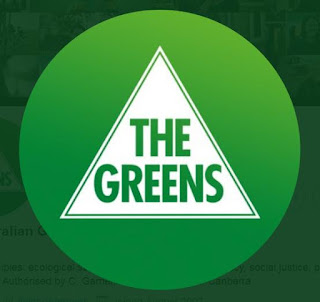 A lot of people might think that this is too long a bow. But it's quite clear that the Greens long for one world government. Party founder Bob Brown has repeatedly invoked the concept, most memorably (and laughably) when he gave his "fellow Earthians" speech. And they're always demanding that we commit to various UN agreements. The UN (like the EU) is clearly a precursor to global government.

Note that the pyramid is superimposed on a green circle, which I'm pretty sure is meant to represent the Earth itself. This is reminiscent of this monument in Blagnac, France, underneath which is a mosaic of the globe.

While Sydney Lord Mayor Clover Moore calls herself an "independent" she is most definitely a greenie and a globalist. As well as her daft initiatives -- such as the bike paths that take up so much space yet so few people actually use -- she places environmentally-themed installations around the city, along with highly symbolic public art.

This is the most recent example, which I saw just last night. It's in Martin Place, and as you can see it's clearly meant to represent a pyramid, and a very green one at that. 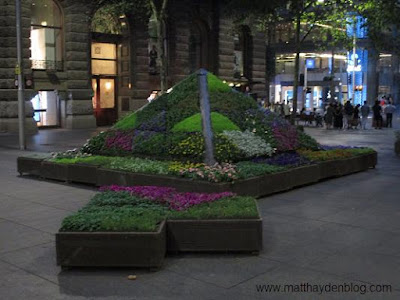 You can see that it is placed right next to the Cenotaph. I don't think this is an accident. PC Lefties are always subverting Western civilization and culture. And one method they often use is to place their own monuments and art works near more traditional, historical ones. Clover herself has form for this. 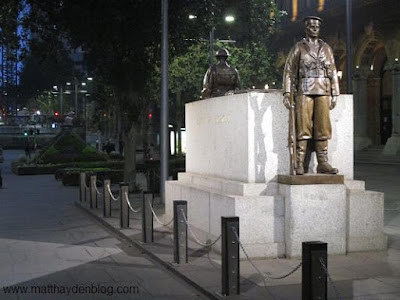 Interestingly, the green pyramid is located exactly where the big Christmas tree was. 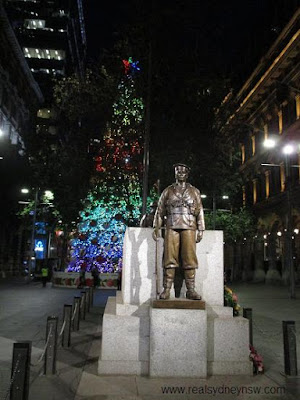 Even that massive structure was reminiscent of a pyramid. And nearby decorations seemed to evoke the Tower of Babel. (The latter is another favourite symbol of the globalist elite, BTW. The EU Parliament Building clearly resembles it. And another well known Sydney-sider, Shakespearian actor John Bell, was clearly alluding to this myth by naming his theatre company after Nimrod.)

Of course the display could simply be perceived and enjoyed as a really big Christmas tree. On the surface that's exactly what it was! But given that Clover is such a well known cultural Marxist I suspected that she was communicating something else with it -- even if only to her fellow travellers.

The fact that this display has now been replaced with something that is blatantly representative of a pyramid means I was on the right track when I made the video below.


Posted by MattHaydenAU at 9:27 AM