Who doesn't love a good conspiracy theory? I know I do. Being a truther is top fun! It's certainly waaay more interesting and entertaining than watching the mainstream media. That's just the approved PC narrative. Sure, they get it right occasionally, because even a busted clock is right twice a day (or rather, once a day since everything is digitally displayed now).

Activists posing as journalists make a point of telling us how authoritative their sources are, and to be wary of all that evil "fake news" created by big bad meanies colluding to hoodwink the public to achieve nefarious ends. Which is actually just another conspiracy theory when you think about it ...

Take what's happening in the MSM right now regarding the claim that arson, not climate change, is the main cause of the catastrophic Australian bushfires.

The idea that firebugs were largely to blame is very well supported. Look at this roundup of primary reports about these incidents. And remember it only goes up to January 5, which is one week ago now.

And these are just the people who've been caught. Think how easy it would be to get away with arson in the country. There are sure to be many more who lit fires undetected.

Is it any wonder that righties like yours truly suspect that this was a coordinated campaign, and that globalist warmist activists were ultimately behind it -- particularly when you consider that there was all that ground fuel resulting from years of batshit Greens policies?

But of course this explanation is anathema to the PC warmist line, and so it must be crushed, and with extreme prejudice! (And that's prejudice purporting to be objectivity, natch.) 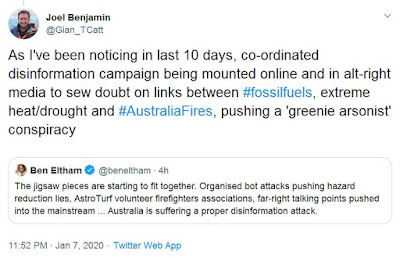 It's loaded with even more irony than the forest had ground-fuel. The greenie notes a "coordinated disinformation campaign" pushing a "greenie-arsonist conspiracy". And the wankpuffin, in true truther style, says "the jigsaw pieces are starting to fit together". It's "a proper disinformation attack"!

That old saying "it takes one to know one" comes to mind here ... The question is, whose conspiracy theory seems more plausible?

Well, according to the greenie-wankpuffin theory I'm a co-conspirator. I'm one of the jigsaw pieces, a scheming member of alt-right media.

Hang on. I'm just a dude with a blog, saying what he reckons. That's why I know this line is bollocks.

I also know there are plenty of others who've come to similar conclusions about the fires, especially on Twitter. We're not colluding. We're just thinking for ourselves and speaking our minds.

But acknowledging that is verboten if you're a warmist. No, they always play the man, not the ball. They immediately look for ways to discredit their opponents, and impugn their motives. They will demonize and dehumanize them if possible. Hence the "organized bot attacks" angle shown below. 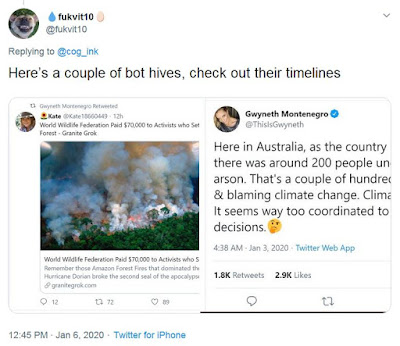 So funny. This leftie tweep is calling real people (one of them a farmer herself and the other a blue check celebrity) "bot hives". And the tweep he's replying to is one of their ABC's narrative peddlers. 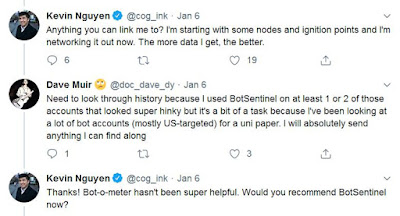 It's hilarious that Kevin here is desperately tryna dodgy up this denialist conspiracy angle by looking for online "ignition points" while assiduously avoiding the inconvenient truth about the actual ignition of many of the fires themselves.

And notice how he actually admits using software to map out this digital conspiracy; software that he openly tells his online helper dude (who I'm sure is not a climate scientist, or even an IT expert for that matter) he finds unreliable. So, he's using crap software to identify real people as, er, malicious software. Oh, the irony!

You'd hope he'd have a little bit more professional pride, wouldn't you? But no. He does work for their ABC, remember ...

I suppose when the narrative is all, it really doesn't matter how you manage to support it. The important thing is to have something that makes it look like you've done some dinkum research, not just a coupla hours of dodgy bot-fockery. Because once you've got it up online your fellow right-on robodolts can use it as well -- often adding their own touches -- thereby massively magnifying its reach. 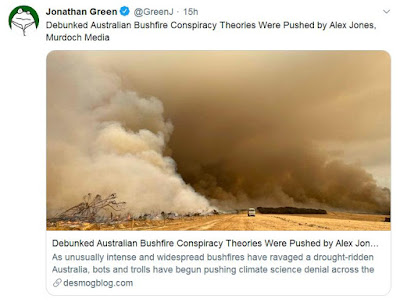 When were they ever debunked? And notice how the bots and trolls angle is featured. Also, the article includes the usual ad hom tactic of using tar baby Alex Jones, implying that if he supports the arson theory it couldn't possibly be correct.

But hang on. What if it is right? It's always the claim itself that's most important and should be examined on its own merits, not the person who makes it.

Not surprisingly, the usual suspects in Hollywood are already peddling the same message about how the arson angle has zero credibility. 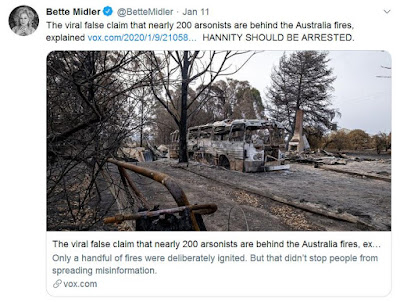 Why, it's almost as if they're all controlled by the same forces, innit? Yeah, well, that's because they are.

It's fascinating how this "denialist conspiracy" being pushed by the warmists is so similar to the Russian collusion line that the entire MSM ran for years (and many "journos" still cling to) about how Trump won the 2016 election. Bots and online disinfo campaigns were a big part of that false narrative as well, remember.

Fact that the usual suspects keep relying on such batshit conspiracy theories is pretty funny. But it's also a real worry. That's because countless normies still get their sense of reality from the mainstream media. When the whole corrupt structure inevitably falls apart a lot of them are just not gonna cope. They'll prolly go barking mad, I suspect ...

Posted by MattHaydenAU at 12:16 PM