"Climate emergency" is an absurd concept

Any sane adult capable of rational thought can see what complete and utter bollocks this "climate emergency" is. It's not frightening at all. But the fact that so many people actually think that we're in one is the truly scary thing.

The globalist warmists behind this whole creepy psyop have immense power and influence. They've managed to brainwash hundreds of millions -- maybe billions -- of people into believing the myth of climate change in the first place.

Then they've ratcheted up the intensity of the rhetoric to make them think that humanity is now on the verge of a planetary catastrophe. So the governments of the world need to obey all of their prescriptions, or else!

Their almost complete control of the mainstream media worldwide has been their most powerful tool in executing this psyop. They use it to create movements and trends, while falsely claiming that they're organic.

The use of the phrase "climate emergency" itself is a case in point. Globalist warmists decided it was time to massively up the ante, so it was seeded from on high into countless articles and reports. This increase was so pronounced that Oxford Dictionaries (also part of the MSM) made it "the word of 2019". The bedwetters at The Guardian dutifully kept the momentum going by "reporting" this fact. 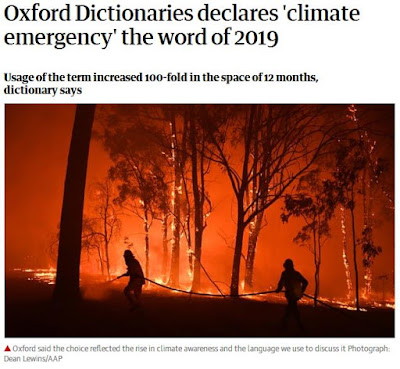 If you're a credulous idiot who's been spooked as intended by the endless doomsaying you won't be able to see the agenda, so you'll believe this to be yet more evidence that the whole phenomenon is dinkum. Hell, if so many people are saying this is real it must be, right?

Notice also how the photo chosen is one of a fire, like so many they use now in stories about this so-called "climate emergency". Obviously, fires themselves aren't direct examples of climatic phenomena. They must be ignited, most likely by direct human action (intended or accidental). So the conflation is a lie in itself.

But the sneaky scumbags have form for this kind of thing. They are always creating false equivalences, then reinforcing them over and over. Another example: criticize Islam and you're "racist". But Islam is not a race! 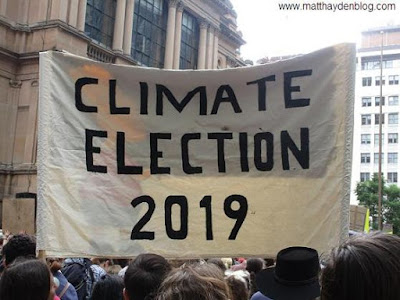 With the scary concept well and truly part of the collective consciousness they then launched a very specific campaign to terrify children. Just shows how low they will go.

Greta Thunberg was the main element in this utterly cynical ploy. She's so obviously a puppet yet the MSM laughably presents her rise as resulting solely from kids' widespread concern about the planet's future.

The global "climate strikes" such as the ones held in Sydney (where the above photo was taken) were a further extension of this massive deception. They were clearly organized by adults, yet portrayed in the MSM as if they were purely a result of childhood activism. 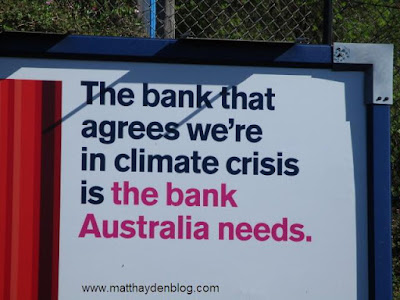 There are numerous examples of the concept being invoked in the corporate world as well. In some cases this seems to be marketing departments attempting to "cash in" on this engineered state of panic. But I suspect it's mostly the result of top-down directives from the globalists who ultimately own these businesses. Their tentacles are absolutely everywhere!

Worse, they are only just getting started. Just as the massive lie of human-caused climate change laid the foundation to launch the crazier "climate emergency" they can now leverage the current state of panic to demand "climate trials" for so-called "climate criminals".

Definitely worth remembering that great line from Voltaire: "Those who can make you believe absurdities can make you commit atrocities."

Which is why I hope that everyone who's been conned by this campaign finally wakes up and realizes that there really is no emergency. Compared to all the other natural forces affecting climate we humans are basically weak as piss, a mere drop in the ocean, after all.

Posted by MattHaydenAU at 12:33 PM