Amazing to watch the lockstep behaviour of the Australian MSM. It's like absolutely all Aussie "journalists" have received a sternly worded memo telling them to keep affirming the climate emergency angle in all reporting of the bushfire crisis no matter what, and to downplay the idea that arson and ground fuel build-up were big causal factors. Most of them are dutifully complying in a simplistic, robotic way, though some are using a more nuanced approach.

Take this from Laura Jayes. It's an implied defence of the dominant PC narrative because she's throwing shade on those arson-as-cause believers who misrepresent the climate change bedwetters. As Stefan Molyneux would say, that is "not an argument". 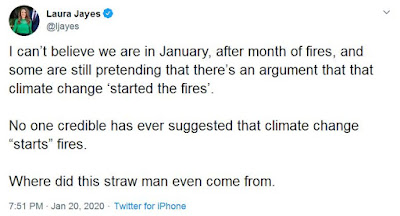 Actually, this is a strawman in itself. It's like when Cathy Newman kept saying to Jordan Peterson: "So, what you're saying is ..." And he kept countering with: "No, I'm not. I'm saying ..."

The main accusation by the climate change skeptics (such as yours truly) levelled at warmist narrative peddlers is not that they are literally saying "climate change started the fires". It's that they refuse to acknowledge arson and ground-fuel build up at all and simply conflate AGW with the fires zif it's a done deal, and you're a bad person and bonkers to boot if you question this at all!

That is, they don't offer a rational argument backed by data for how AGW has exacerbated the fires. If their view is correct this would be easy to do, surely. Where are all the graphs showing massive increases in temperature, wind, aridity etc as compared to previous years, and particularly in the areas worst hit, for example?

They don't do this because they can't. The changes -- if there are any -- are not that pronounced. So instead they go straight to saying the fires themselves are climate change; that Aussies in smoke-filled areas are "breathing in the evidence".

This conflation trick is a favourite of the PC Left. Take victim feminism. Criticize it, and they'll say you're being misogynist. But why does that follow? In what way are feminists representative of all chickdom? And why does not accepting a claim of victimhood mean you hate all women?

Same deal with warmism. Can't handle any scrutiny at all. So they go straight to accusations of "denialism".

Or, like Laura Jayes does above, they try to distract and derail you with strawmen, something that seasoned PC narrative peddler Malcolm Farr uses also. 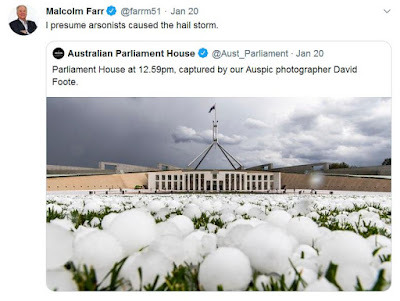 Though, it's prolly more accurate to call this a rhetorical "iceman" instead ...

And while it may seem convincing to other converts to the climate change religion, by reminding the reader of the widespread firebuggery it just begs the question: Who were those hundreds of matchstick men who did light so many fires and what were their motivations?

That's where the real story is, surely.

Posted by MattHaydenAU at 1:37 PM