Hollywood, Hillary and their ABC all on same page re fires. I wonder why?

We've long known that Hollywood is totes crazy. It's chockas with narcissists who have some very weird beliefs, after all.

It's also clear that politics has more than its fair share of people who are utterly full of themselves, and wanna pass laws to directly change their nation's economy and culture, as well as many other aspects of it. Politics is showbiz for ugly people, as the saying goes.

Then there's the MSM. Local "journalists" "report" on the goings on in Canberra, but they consider themselves players, too. Why else would a bunch of bloviating, up-themselves twats at their ABC have a show called Insiders?

But the reason you see such a strong common theme throughout these institutions is not just because they tend to attract yugely deluded arsehats who get off on bossing people around. It's also because they are all part of a massive, global mind-control system that has been built up over many decades.

This diabolical operation is clearly in overdrive in relation to the ongoing bushfire crisis here in Australia. Remember that the whole issue of catastrophic human-caused climate change is a gigantic lie whose main purpose is to con the normies of the world into not just accepting but demanding top down, centralized one world government.

The same globalist Cabal that has created this con totally controls Hollywood. They've carefully chosen people they know they can manipulate, then lifted them into the upper echelons of a pyramid-like culture, telling the masses that they're there solely because of their massive talent and deep compassion. That's why the sanctimonious freaks are so fond of delivering political messages during awards ceremonies.

And that's exactly what's happened at this year's Golden Globes. 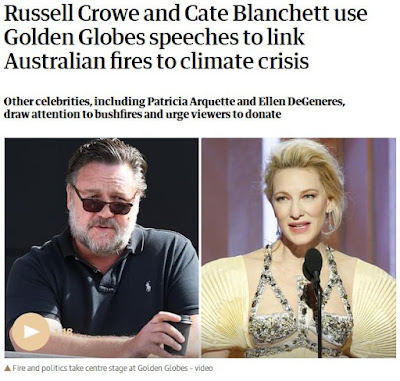 They are of course flogging the whole AGW line, which is that climate change is to blame for the fires when it's utterly obvious to any sane adult that widespread arson attacks (most likely engineered by this same evil Cabal) are the main primary cause. And the globalist Greens-caused ground-fuel build-up has ensured that they have raged so widely and with such intensity. 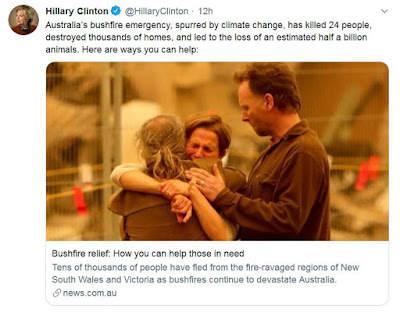 Numerous blue check slebs are doing the same on Twitter. Bette Midler has been banging the drum harder than most.

Here in the Australian MSM we have a more nuanced approach, but still dodgy as all get out. Take this activist purporting to be a journalist, who is so typical of the robodolts "employed" (at our expense!) at Australian Fake News HQ in Ultimo.

While he's not paid to act, sing, or dance he's still dutifully reading from the "climate emergency" script. It's been planted deep into his consciousness and dominates all his reactions related to this subject.

He simply can't handle any resistance to his puerile warmist PC line, so sneeringly dismisses it as coming from "bots" or "fucking idiots". He thinks he's a somebody, and they're all nobodies.

The creepy control system has never been clearer. Ricky Gervais' glorious monologue was powerful in revealing the machinations of the Hollywood aspect of it.

I talk about how it operates in this video. Particular thoughts on its likely collapse are at about the 7 minute mark. After the massive red pill that squillions of viewers got from watching the intro to the Golden Globes, I think this might happen faster than I expected!


Posted by MattHaydenAU at 5:21 PM