All mainstream media outlets are ultimately owned and controlled by the globalist elite. That's why they've been pushing the fear of the dreaded 'rona relentlessly since March last year. They're doing their part to keep everyone packing their dacks so they'll get the jab.

The Daily Telegraph is one of the worst offenders in this regard. They've even got a dedicated section for all the fear pawn called "Contagion". You know, like the movie.

This was the cover after the July 24 demo, which was big. The cops were also heavy handed, hence the violent scenes. 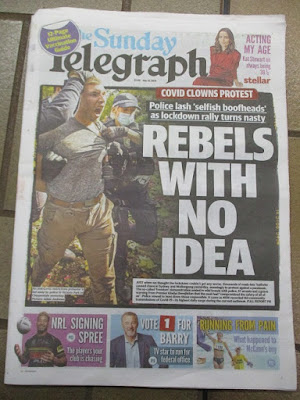 TPTB were obviously fretting about the sheer size of the demo and their dwindling ability to keep the sheeple in line. So they tried some preemptive intimidation. They colluded with the MSM to create a false narrative about a planned protest so they could warn anyone intending to do "the wrong thing". 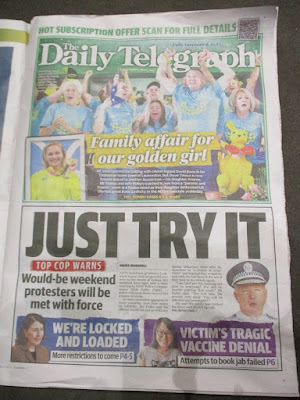 The whole thing was a joke -- but a sinister one nonetheless.

Since then there's been a big shift in the way the plods are approaching things. Mick Fuller has been punted, and now they've got a new female police commissioner who is keen to reengage with the community.

So they've let the protests be held. And they have been absolutely yuge. They were also peaceful. That was in major part because the coppers were restrained, unlike before.

There were clearly tens of thousands of people at each, with the most recent one -- November 27 -- the largest by far. Surely this was major news. But what did the Failing Terrograph do afterwards? Ignored them almost completely. 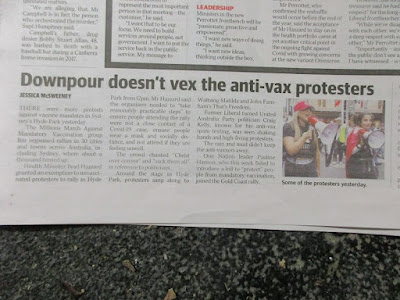 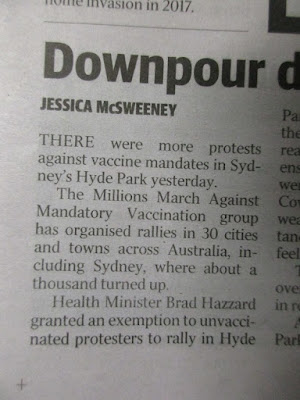 There were just a couple of small items, including this one on Sunday the 28th. As you can see, the first paragraph says that there were "about a thousand" people there.

Even opponents of the demo acknowledged the immensity of it. Take this tweet from a leftie to the Chaser "boys". He says the procession lasted at least thirty minutes. And it was likely going a while before he tried to cross. 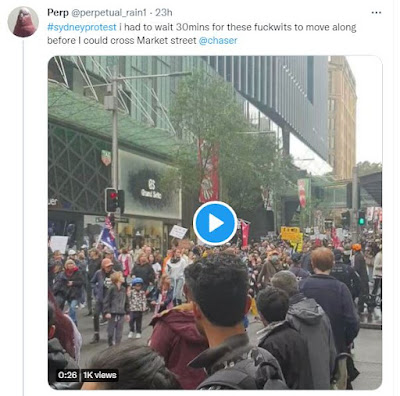 Given that the crowd filled the street it's fair to say that at least ten people passed a stationary point each second. That means six hundred per minute. In half an hour, that's eighteen thousand. And this time period was not even the entirety of the procession. I know this because I was filming it for longer than that.

Look at my videos of the crowd returning to Hyde Park. And this was just through one entry point. People were coming to watch speeches from all around. There were easily tens of thousands of people there, possibly over one hundred thousand.

What a joke the MSM are!

Posted by MattHaydenAU at 12:49 PM