A lot of American patriots believe that Trump is actually still in charge, and that "devolution" has been in effect the whole time Biden has been POTUS according to the official narrative. In this alternative theory Biden, along with all other members of the US Government, is merely playing out a role to "wake up" the people to the reality of the Cabal and Deep State. All the while the "white hats" are "draining the Swamp" behind the scenes.

As the days wear on and Biden in particular appears more and more bewildered and pathetic -- and the MSM increasingly corrupt as they try to put a positive spin on his behaviour -- the more I think this theory is correct.

Take this alleged "bathroom accident" that was supposed to have occurred in the Vatican. If the Biden regime were in complete control, would an event like that have been, er, "leaked" to the public? I doubt it very much. 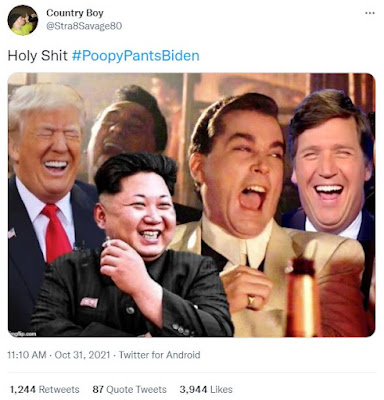 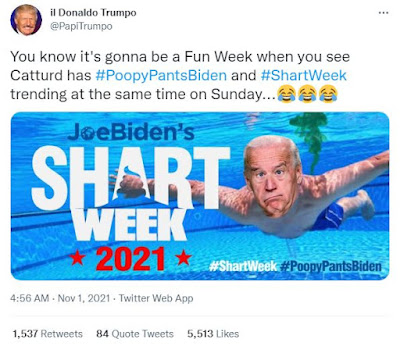 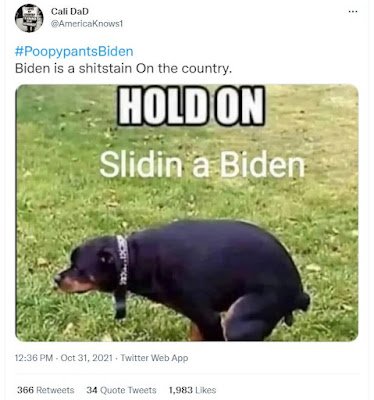 Patriots across the world over have had an absolute ball making fun of this of course. The hashtag #PoopyPantsBiden has trended repeatedly among other things.

Obviously "Sleepy Joe" (who was just filmed nodding off at the COP26 climate conference, thereby validating the Trump-coined nickname) is not really in control of anything much, including his bowels. But the sinister team of globalist fascists who use him as their puppet don't seem to be able to define the narrative to their liking that much either.

That's why I think it could well be that the white hats really are the ones ultimately calling the shots from the shadows.

Posted by MattHaydenAU at 12:30 PM