If you're awake, you'll know there's a massive world war going on right now. But it's not being fought between nations like all the previous ones were. It's being waged by the globalist elite against humanity.

These evil scumbags at the apex of the power pyramid are using governments across the globe to carry it out. The main thing they wanna do right now is get everybody trapped in a technocratic control system. Getting them "vaccinated" is absolutely crucial to that.

Obviously they can't afford to wake up the population to what's really going on, so they have to keep using deceit. It's a mind war and their mission is to trick as many people as possible into getting the shot of their own volition, or at least without overt physical force being used.

Their ability to do this is waning by the day. So they're becoming increasingly desperate with scare tactics. One very strong trend I noticed several weeks ago was a narrative in the MSM I called "vengeful 'rona". In it, numerous people who were full on "antivaxxers" -- or at the very least cavalier about the threat the virus posed -- were struck down by it with extreme prejudice. 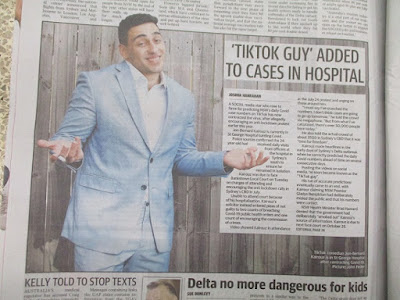 This Aussie comedian was one local example. There were heaps of others, mostly in the USA. I collated these "vengeful 'rona" horror stories into a thread. Please check it out here.

At the time I thought it was a good thing that this insane, laughable narrative was being flogged so hard in the mainstream media because it showed that the globalists were desperate as. They were throwing everything at the Resistance. I knew it would work on some really brainwashed people, but I was pretty sure it was waking up far more than that.

That seems to have been the case because "vengeful 'rona" stories have all but disappeared from the news now.

TPTB seem to have dumped it as a tactic because it wasn't working. Now they're focusing on exploiting people's fear of social ostracism and poverty as a result of unemployment. This interview with the AMA President in Queensland is a perfect example.

Being a doc, you'd expect him to use medical data to justify his argument. But instead he just repeated the same old extortion script being used by dopey pollies and MSM robodolts. What a pathetic clown!

Also, he looks joyless and unlikable himself. He's not exactly convincing when lecturing Queenslanders on how to avoid misery and improve their social life.

Posted by MattHaydenAU at 12:11 PM