Pretty clear that we are in the middle of a global mind war. And it's being waged upon us by the creepy cult that rules the world.

These uber-scumbags are truly evil. Hell, they're proud of it! They use evil tactics all the time because these get them what they live for: total control of a person's soul.

I know it sounds utterly batshit, because it is, but many of these demented freaks are actually dinkum Satanists.

It seems to be that more and more people are becoming aware of that fact. And they are letting their feelings be known.

A witch's hat lobbed onto the Hyde Park Obelisk seemed to be an example of this. Here's what looks like another one: 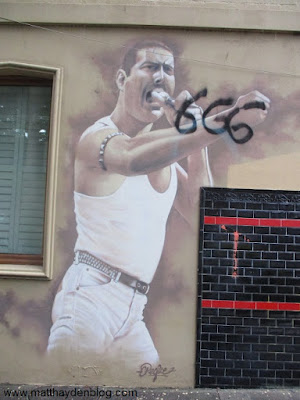 If you live in Sydney's Inner West you will know this mural for sure. It's clearly visible from the train line just between Newtown and Stanmore stations. It's been up there for years and has never been vandalized. But recently this very distinctive number was sprayed over it.

Now, I don't support the defacement of any kind of public art. And I don't even know if Freddie Mercury himself was into black magic and all the rest of it. But the music industry is certainly full of people who are. Young performers literally sell their souls to become famous.

So, while I'm against this kind of political statement, it does seem to be another data point confirming a growing awareness of the jaw-dropping pervasiveness of literal Satanism in many industries and institutions.

It's like we're living through a nightmare. But we don't actually realize that until after we've woken up!

Posted by MattHaydenAU at 1:50 PM