My heart bleeds for Daniel and Sarah

If there's one thing that's certain in this surreal time it's that we're in the midst of a massive "mind war". While coronavirus itself looks dinkum, the COVID-19 craziness is clearly orchestrated by TPTB. They want everyone as stressed out as possible while they continue to pursue hidden agendas.
While the entire political establishment in Oz look like they're either supportive of these sinister globalist goals, or are at least aware of them, Dan Andrews is surely the most zealous in trying to realize them.
The label "Dictator Dan" is no exaggeration at all. What he's doing is totalitarian without a doubt. One of the hallmarks of these regimes is their production of propaganda. In balls-out commie states, there'll be heaps of statues and posters glorifying their "great helmsmen" and other in-your-face stuff. But in places where the control system is covert, it comes in the form of fake news.
His creepy government is producing this directly as well as through the MSM with all their crap about how anti-maskers are batshit conspiracy theorists. I think he's also got some faux victims doing video testimonials about the horrors of being infected with the dreaded 'rona.
Remember the video of the schoolgirl at an Australian climate strike who cried about her bleak future and it turned out that she was an actress? I get the same vibe from this. 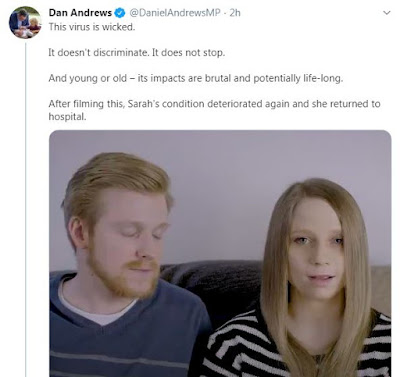 Watch the video at the Twitter link. It really does look like she's performing a script. We keep hearing that the virus "doesn't discriminate". Yet here it has hit an articulate, appealing young woman -- with a caring and sensitive partner -- who seems remarkably assured in front of the camera.
As well as being so woke that it refuses to infect BLM protesters, the bug seems to have an eye for talent as well! I wouldn't be surprised if "Sarah" has got a profile up on Showcast, TBH ...
Also, I found Dictator Dan's description of the virus as "wicked" to be interdasting. What an odd word to use. My first thought: Dan himself is way more wicked than the virus and he knows it.
Could it be his way of hiding in plain sight? That is, by obliquely admitting to the wickedness of this deception, he's making it acceptable. Creepy globalists have form for this kind of thing, after all.
There was another monologue to camera that I thought was suss as. This was from a male nurse on the "front lines" of the "pandemic". 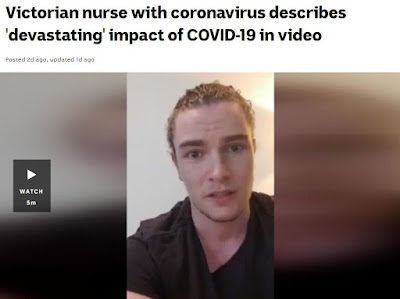 Look at this dude. "Daniel" could easily be a model or actor. Maybe he does have nursing qualifications, so technically he's not really lying ...
Still, I can see how ambitious young people could be convinced to do this kind of stuff. They think it's "for a good cause" and know they prolly won't be sprung, since many others have done similar things and gotten away with it.
As well as his obvious good looks and ease in front of the camera, he seems to be hitting many of the main talking points about how devastating this disease is -- and not just for those infected. Really supports that narrative about hero doctors and nurses risking their lives on the front lines, dunnit?
Call me a wacko wingnut if you want. But it looks very much like the Victorian Government are desperately worried about the growing realization among normies that the vast majority of people are not at risk of death or serious illness from this "pandemic" -- young, healthy folk least of all. So they've dodgied up these videos with a coupla young actors to counter it.
Both the timing and content of these monologues seem suspicious. Reminds me of those videos of "conspiracy theorists" recently. Originally I thought that Eve Black was dinkum. But in retrospect I reckon she, along with at least one of the Bunnings Karens, could also be some kind of performer, a "crisis actor".
Actually, I think that being skeptical about all videos coming out of Victoria now is prolly a good policy. Even this brutal arrest that is currently going viral might be a stunt. Sure, it makes the cops look bad. But isn't that part of the whole globalist agenda? In the USA the dirty Dems wanna defund the police, remember.
Could it be another engineered distraction that keeps mainstream and social media looking elsewhere while Wicked Dan the Magician Man gets busy undetected? I'm thinking he's doing something really big under the cover of darkness -- hence the curfew. Is he installing a Wuhan-style facial recognition system or similar at night? Not impossible, I reckon.
Thanks for reading, and if you've enjoyed this piece, please consider supporting me via Ko-fi. Aussies, know your rights!
Posted by MattHaydenAU at 2:16 PM