I have mentioned the creepy rock spider vibe that's often present in the Failing Terrorgraph in previous posts. The stories themselves can be subtly sinister, but the atmosphere is present in what they place around them on the page as well. For example they will often have words in headlines evoking violence and death near photos of kids that are included in other articles.

Look at the page below and you'll see a headline about deadly snakes at the bottom of it. (Interesting that they're seen as potential lifesavers as well. So there's the duality they love so much ... Up is down, good is bad, and right is wrong, don't ya know!)

There's also one on the adjacent page (not visible) that reads "fatal sex chat".

Of course this kind of thing will happen from time to time just by chance. But I see it so frequently it cannot be random.

Look at the headline. It begins: "Family hit ..." Putting "hit" near photos of kids is a particular fave of theirs. If you live in NSW, keep an (illuminati) eye out for it in this paper particularly. I'm sure you'll see an example before long.

Then there's the rest of the headline ... But that's not the end of it. 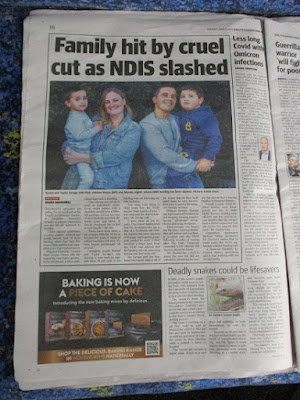 Look closely at the placement of the words "cut" and "slashed". They are right over the heads of the two kids. Given the context I'm absolutely sure this was done intentionally.

Think how twisted you would have to be to dream something like that up, let alone actually put it in the paper! Remember, this is not a fictional horror story in an anthology. This is "journalism" involving real people.

Needless to say, hardly anyone notices this kind of thing. That's because they don't suspect that there is a hidden agenda -- least of all one this sinister. "That couldn't possibly be; it's just a newspaper." So they just don't see it.

But when you realize there is something like this going on, I guarantee you'll start to see it. And that's not because it's only in your head and you're "projecting". You'll see it because it's actually there. 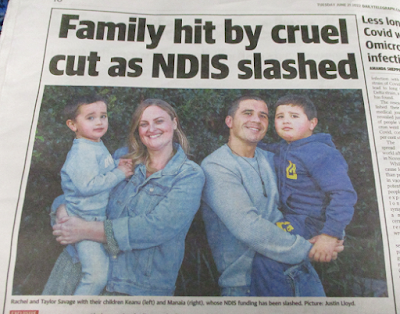 Look closely at the family name, shown in the bottom left of the photo above. Click on it to give you a better view if it's not visible straight away.

The family surname is "Savage". So that becomes the adjective to describe the severity of those cuts and slashes, geddit?

This is just so creepy and wrong. And they do this kind of thing all the time. I see so many examples like this I just cannot keep up. And that's just in the one paper.

This particular trick is more pronounced and commonly used in this particular lie factory. But you see related patterns right through the rest of the MSM.

This is a top down cultural phenomenon. I think it has a lot to do with the secret society wankers in the editorial tier who dominate all of the MSM.

Please start looking for this kind of thing. I'll bet you'll see examples that creep you out before long.

Posted by MattHaydenAU at 10:45 AM