So obvious that the Cabal are ultimately behind these big hacks of companies like Optus and Medibank. It's what the globalist elite do all the time. They dodgy up threats, then manipulate normies' perception of them through their control of the MSM, always pumping up the fear. Then they offer a solution that involves more state control and surveillance.

As well as psyops, they are also occult elite rituals. And the MSM are in on them. They will do their part to magnify their power with symbolic incantation.

Take this Sky News report about the Medibank hack. First thing I noticed was the photo they chose of Clare O'Neil. She was wearing pink. If you've been reading this blog for a while you'll know what I think that symbolism is about. The red and white of the sign complemented it too. 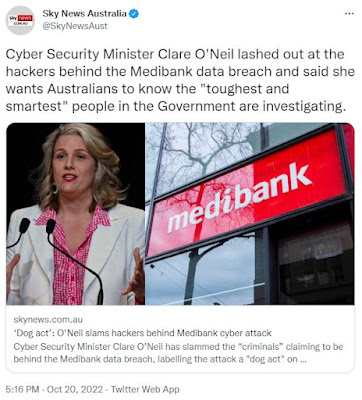 Note how the description includes the hero quote "dog act". My first thought upon seeing that was: "Was it a blue dog?"
So I have a look at the clip and what do you know but that's exactly what it was! Note the blue background and the colour of her blouse. 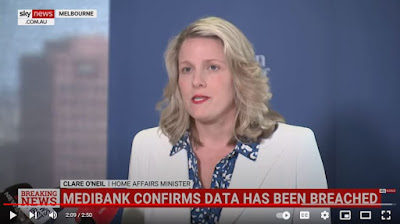 Watch the video and you'll see she makes a big deal about this term "dog act". I'll bet her handlers told her to do just that, as well as what to wear.

This hack was actually foreshadowed in an ad the big health insurer took out in the MSM in late September, I reckon. Please check out the video embedded below and you'll see what I mean.

It included clear bleeding eye imagery that echoed the Optus (eye) hack, which was like a massive symbolic eye gouge.

As I explain in the video, this was like an expression of solidarity with the big telco. It was also likely a hint that the same thing was planned for their company. And note the theme of pink in combo with the red and white which is seen in the Sky News tweet above.

These people are total arseclowns. So obvious what they're up to.

Posted by MattHaydenAU at 12:45 PM