I'm completely convinced that there are hidden messages being placed throughout the content of the MSM. Locally this practice is easiest to spot in the pages of the Failing Terrorgraph. Even their cartoons contain sneaky comms!

Yeah, I know it sounds completely batshit to say that but it's definitely what they're doing. Please check out this video and you'll see that even if my conclusions about what the symbolic subtext actually means are incorrect they've certainly painstakingly created one.

I suspect that those high up in these globalist-owned lie factories have a very good idea of the plans and tactics of the Cabal. So they drop in hints about this to their creepy mates. Sometimes they're right there hiding in plain sight in cartoon form.

This one from the April 9 issue is a case in point. 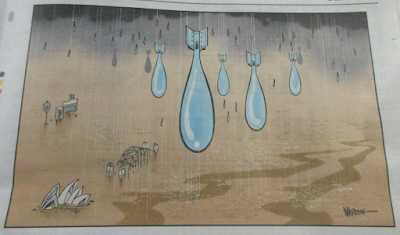 As well as the rain bomb imagery shown above, they have used that actual term in the headlines a few times now.

Rain bombs are exactly what they were, I reckon. The size and duration of the deluges earlier in the year were just so OTT they had to have been man-made. And they kept hitting the Northern Rivers area of NSW incredibly hard. That's because the globalists ultimately behind them were trying to wash the people out.

It was all part of the Great Reset plan to bankrupt farmers and push the population into "smart cities" where they can be digitally controlled and made to "eat ze bugs"!

What's interesting is that the entirely corrupt MSM have been pumping up the fear of a similar deluge that was supposed to hit last weekend.

Yes, it did piss down and for a while. But in Sydney at least it wasn't nearly as bad as they predicted.

So perhaps the globalists are losing their power to pull off this kind of geoengineering? Or it's being neutralized somehow by the Self Organizing Collective, otherwise known as the "white hats"?

Given how crazy the world is now I'd say that pretty much anything is possible. So let's hope that this is actually the case.

Posted by MattHaydenAU at 2:40 PM