There's absolutely no doubt that the Cabal wants a war with Russia. Look at the recent craziness to do with Nord Stream, among other things.

These recent developments lend weight to my theory that the Deep State might have a massive false flag planned for the near future. From the creepy hints that I've seen in the MSM (which are all owned and controlled by globalists, remember) it seems that a big entertainment or sporting event in a stadium is the likeliest target for such an attack.

Here are some more data points for you to consider:

This is a cartoon from a recent issue of the Failing Terrorgraph. As mentioned, they often create subtextual meaning with the headlines from the column below, even if it's entirely unrelated (which is usually the case).

Note how the toon features Putin and Biden in an "impending war" scenario. Below it is a column about gender equity, and how the high achievement of sporting women can be seen as a model for what is achievable in wider society.

It says you can "kick goals", bringing to mind professional football, and therefore stadia. 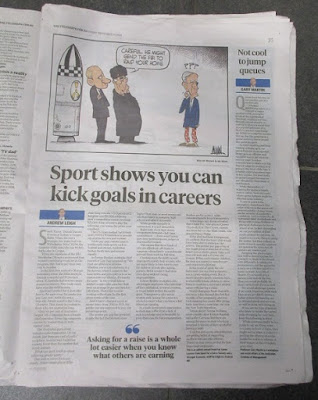 But if you look closely at the column by Labor's Andrew Leigh, it hardly mentions footy (or soccer or NRL) at all. The introduction is all about swimming. Football is only mentioned very late, along with several other sports.
So why was this particular analogy in the headline? Because the editor wanted to create the subtexual message in combo with the images above it. 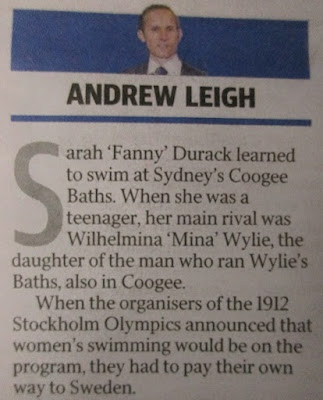 And it's worth looking closely at that cartoon ...
Behind Putin is a nuclear weapon. Note the black and white theme, so reminiscent of the Masonic checkerboard flooring. I think that's a hint that secret society wankers are involved somehow.
Putin's shady lookin' sidekick -- prolly an old mateski from his KGB days -- whispers to him. Note how his right eye is wide open. More illuminati symbolism, I reckon. 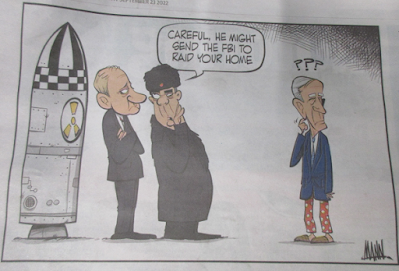 He says: "Careful, he might send the FBI to raid your home."
This is a clear reference to that line about Trump stealing the nuclear codes and hiding them at Mar-a-Lago. The same paper actually ran a cartoon about it at the time. It showed him with a nuke in his golf bag. 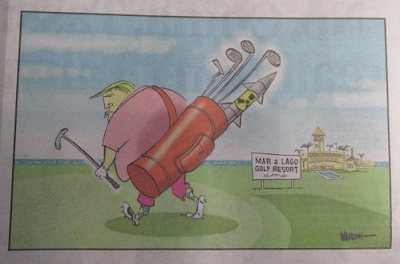 It had eerie similarities to the one a week later about the Bali bombing accomplice being let out early and receiving a cake -- which was surrouned by a dirty yellow background (see this blog post).
The similarity between the terrorist's cake toon and the golfing Trump one was so clear I made a video about them. Please check it out.
Back to the most recent toon: It has Biden looking the other way, confused. Note the three question marks on his head. What letter does "question" begin with? "Q", of course. 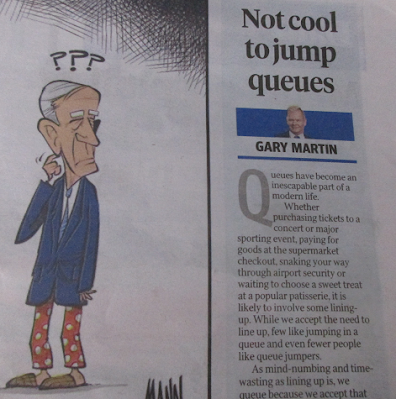 He's looking in the direction of the first letter of the column about queues, and the jumping thereof.

Why, it's another "q"! What an amazing coincidence! Or maybe not ...

I think this is some sort of code that refers to the threat posed to the Deep State by Mysterious Mr Seventeen (Anon).

As well as the focus on the letter itself, look at the second paragraph. It mentions "snaking your way through airport security," bringing to mind terrorism. Right after that are the words "waiting to choose a sweet treat at a popular patisserie".

So there are the two elements again: terrorism and cakes. As I often say: What are the odds?

It really does look like comms to "those in the know" that there's a plan to evade the white hats by carrying out a false flag attack with a dirty bomb. With blame ultimately sheeted home to Putin it can be used as a pretext for a nuclear strike against Russia.

It's absolutely clear that the Cabal are hanging out to do that, which is why I think my speculation is plausible. They must have a good reason for it, remember.

Trump can be neutralized at the same time by rehashing their favourite false narrative about how he's been in league with Mad Vlad for so long.

Maybe they've even got some mind-controlled loon they can claim is a Q-tard to carry it out?

Here are still more data points that lend weight to that theory.

Note how the title of the column above says it's "not cool to jump queues".

And look at the back cover of that same issue. It's about an NRL player making a comeback. 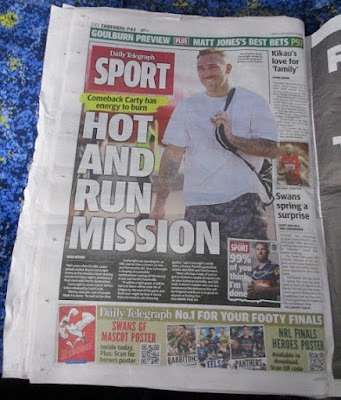 The heat angle comes from the game being played up in sweltering North Queensland. There's that first letter again.

Note the subheading: "Comeback Carty has energy to burn." Firstly, it has two words starting with "c". They often do this and given it's the third letter of the alphabet I think it's meant to evoke 33.

Note the yellow background and the idea of energy burning. I think this relates to yellow cake and the explosive chain reaction it would ignite. 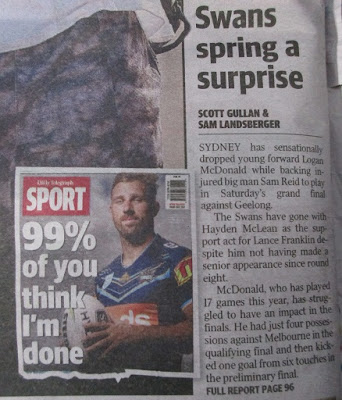 Look at the photo and quote featured above. Flip that number over and what have you got? That other occult elite fave 66.

It could also be a reference to the idea of the Cabal being on the ropes. If this plan succeeds it would obviously be a stunning comeback wouldn't it?

Note the alliteration in the headline to the right. Again it refers to a surprise. Well, such a spectacular attack would defnitely be described as such, right?

Note the number of games mentioned in the third paragraph above: 17.

Sure, each of these data points is not suss on its own. But it becomes just that when you add them all up. 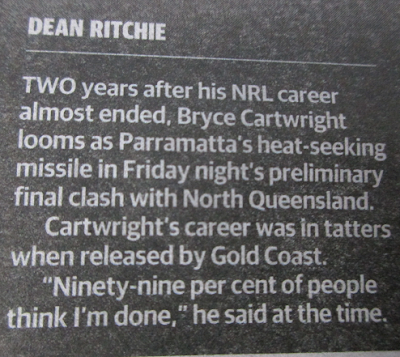 The player is described as a "heat seeking missile".

This is very specific imagery that is reminiscent of the MSM describing the recent Hawthorn racism scandal as a "bombshell", something I elaborate on in the video embedded below.

The final data point is what seals it for me. They've chosen a photo of the dude that shows the tatt on his arm. 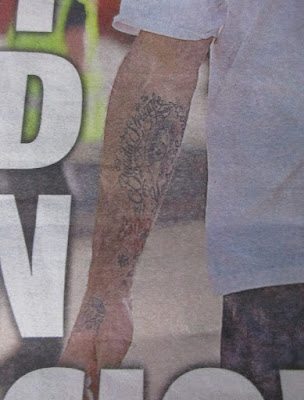 It's the classic all seeing eye, which harks back to the KGB dude whispering to Putin in the cartoon earlier in that same issue.

(Just as a side issue: Remember that stolen car bursting into flames after a collision on the Coat Hanger? The guy driving it ended up in hospital, and he had a similar tatt. That looked suss to me, and I spoke about it in this video.)

BTW I'm not saying I think this NRL player is gonna blow himself up in a stadium. They're just using these words and images symbolically to communicate a plan that I think involves such a scenario. It could happen anywhere in the world -- if it happens at all, that is.

Obviously I hope it doesn't. And TBH I don't think it will. I suspect that the "white hats" have actually got things under control so that the plan is not actually carried out.

But it really does look like they've got something like what I've described up their sleeves to use as an absolute last resort before November. Hence this symbolic pattern in the local lie factories.

I know this decode might seem outrageously, laughably OTT to many people. But please look closely at the elements I've cited here and in the other post.

Keep asking yourself if this can all be explained by mere happenstance. I think any critical thinker will conclude that it simply cannot.

So, even if my explanation for what I've collated is not correct, I'm sure there's still something big that local secret society wankers know about and are alluding to. Whatever it is, it's pretty sinister.

Posted by MattHaydenAU at 5:33 PM