I've often mentioned a bizarre phenomonon in which people with names like Luke and Lucy feature in MSM articles inordinately often. The only thing that seems to explain it is that they are shout-outs to Lucifer, the fallen angel. That's why you'll often see imagery that evokes falling from the sky in the articles themselves or close to them on the page.

Please check out this video about how several stories within a month and a half featured a little girl called Lucy at the top of family photos. FFS, what are the odds?

I've seen plenty more examples right across the MSM. This is not an isolated phenomenon.

Here's another case in point: Comedian Judith Lucy has retired from standup comedy.

Maybe this was an entirely organic event. But I wouldn't be surprised if it was engineered somehow. In any case, it's newsworthy. Given that she hails from Perth, the story featured in both the West Australian and Perth Now. 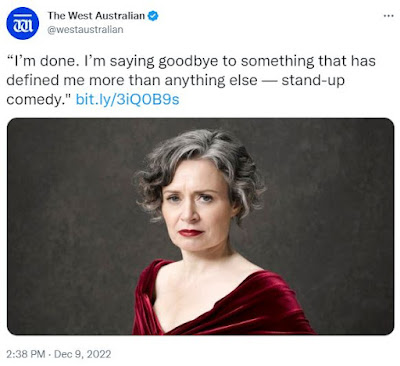 Note how they've chosen the photo in which she's wearing the magenta top. That colour theme is often associated with this pattern.

I think the falling imagery is implied by this standup stepping down from the stage and bowing out of the spotlight.

It's not as obviously symbolic as other examples, and I've shown plenty of those. However it still fits the pattern.

This is a screenshot from the ABC piece she wrote about her reasons for quitting. Again, it includes a colour in the pinky-purple range. Look closely at the photo credit. 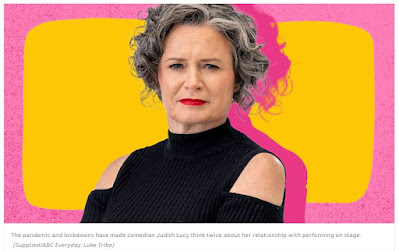 It says "Luke Tribe". So there's another Luke and Lucy and in the same shot. Twofer!

There is no way that this happened by chance. This is what I mean when I say that these are symbolic incantations.

It's like they're tryna cast spells; to summon forces -- or in this case, the notorious fallen angel himself.

I'm no expert on the occult. But I do know that hexes come with very specific instructions. For them to work the witches and warlocks have to put their talismen together in a very specific way and repeat chants exactly as ordered by those ranking above them in the coven hierarchy.

In a small and subtle way, I think that's kinda what they're doing here and in the many examples I've collated from the Failing Terrorgraph.

Note that this item is from their ABC, which is the polar opposite of Rupert's rags on so many issues. So this is not about the ol' Left versus Right conflict. It reveals the batshit Luciferian cult that dominates across the entire MSM on the editorial level and above. As Breitbart said, politics is downstream from culture.

Aussies, check out these Sydney-themed postcards. And please check out the great range of T-shirts and hoodies to get the anti-globalist message out that is linked here.

Posted by MattHaydenAU at 10:01 AM