Lucy on the slide with omens

I have written before about how I believe that a batshit Luciferian cult is ultimately running the MSM. By that I mean that the members are very high in the power pyramid, not everyone who works in the field.

It seems that these creepy control-freaks are very anxious these days, which is why they keep dropping their beloved symbols into the outlets they own and control.

One of the most frequently seen patterns is clearly meant to evoke Lucifer. In it, people with names that are similar (such as Luke and Lucy) are featured in stories. Other occult elite obsessions (such as blood) are included in these items or ones nearby on the page.

Two classic examples are described in this video. In the first a celebrity chef called Luke is seen high up on the Sydney Harbour Bridge. The headline evokes heaven, and a story about a high flying banker falling from grace is adjacent to it. The story below both is about a bicyclist involved in a crash.

When combined these elements clearly evoke the notorious fallen angel. They really like this chef because of his name and the fact that he's a mover and shaker and therefore newsworthy in the traditional sense. So they did pretty much the same thing featuring him in another issue.

The woke editor is an equal opportunity employer because the other example in the video above features a little girl called Lucy. She's at the apex of a family photo, with other headlines that evoke falling nearby on the page.

There have been several other examples that are remarkably similar. These are described in the video embedded below.

This is one of the most recent ones. It was in the Failing Terrorgraph on November 26. Note how the spread includes a "blue dog", which is another symbol seen often in the creepy lie factory. 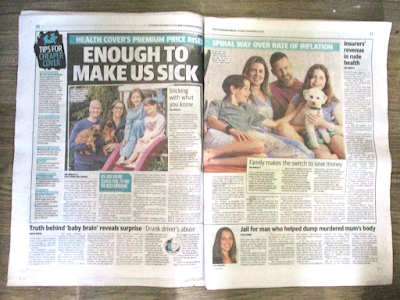 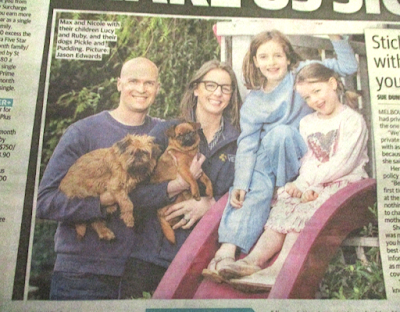 As you can see, the girl in the most elevated postion is called Lucy. She's sitting atop a slide, a structure that you "fall" down.

They've even chosen one that is pinky-purple. And they really love that colour for its symbolism.

Then there's her sister called Ruby who wears a T-shirt with a heart symbol.

Note the two dogs and how they have ginger fur. That's another recurring motif.

I don't know how they could have managed to get so many of their favourite elements into the same photo. Are the parents occultists themselves? That's possible but I doubt it ... Perhaps the photographer makes suggestions about what should be worn by the subjects beforehand?

Sometimes I even wonder if these people are real. Do they generate them with AI? Obviously that's unlikely but I wouldn't be surprised if that's what they're doing.

In any case think of the insane amount of care and attention to detail they put into this one story. And all for an effect that the vast majority of the readership would be completely unaware of.

Please check out the other examples below. You'll see there's a real pattern.

So the question is: What's behind it?

My theory that these are all shout-outs to Lucifer seems to be the most plausible given the context. But I am definitely open to other explanations. Please feel free to include them in comments.

Aussies, check out these Sydney-themed postcards. And please check out the great range of T-shirts and hoodies to get the anti-globalist message out that is linked here.

Posted by MattHaydenAU at 11:21 AM