Something that is now increasingly clear about the batshit occultists who control the mainstream media and many other global institutions and industries is their need for total control of every aspect of all our lives. They see themselves as gods, and so have an obsession with defeating the Christian God Himself.

This is why they love the idea of inversion encapsulated in the transgender ideology among other things. And what could be more of an inversion than blacking out the sun? So it's understandable that they have an obsession with this idea as well. There's even a cult with that name and there are a whole plethora of rabbit holes to do with it.

I think many of those high up in the globalist system we've been living under for so long probably are members of this cult. But even if they don't subscribe to it formally, they clearly get off on flipping things completely upside down because of the feeling of omnipotence it gives them.

Bill Gates wants to black out the sun, remember. He says it's to protect us from global warming but that's obviously a crock. It's another way for him to play God.

This juxtaposition of sunlight and complete darkness has been symbolically invoked in a lot of the reporting about various issues lately. The coverage of the death of Olivia Newton-John is a case in point. 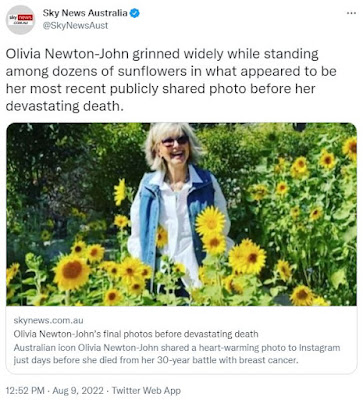 The late singer certainly had a sunny disposition. So it was no surprise that this photo of her was featured in many articles.

She's smiling among sunflowers, while wearing sunglasses. So there's the inversion.

They also seem to have a slight purple tinge. (Notice also the use of the phrase "heart-warming". The number of times you see this and related terms is just off the charts.)

In the photo below, she's wearing sunnies again. And there's mention of the light at the end of the tunnel.

There's that duality again. It brings to mind an image not unlike a reverse eclipse. 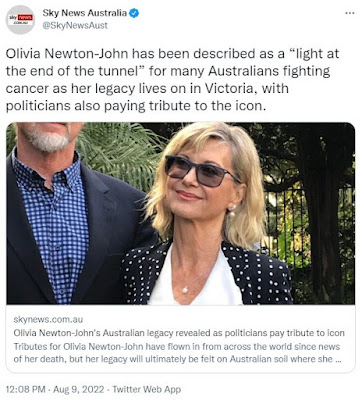 The Failing Terrorgraph is run by perhaps the creepiest Cabal clowns in all of Oz. So I expected them to put the sunflower-sunnies snap on the cover the day after Olivia Newton-John's death, or at least feature it in a spread about her.

Well, they didn't do that exactly. But they certainly repeated this "black sun" theme.

There was a souvenir edition inside the paper. On the cover was a classic shot of the beaming star. She positively exuded light and laughter. 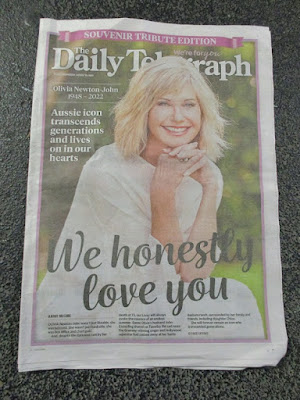 On the back of the liftout was a shot representing her darker (but still adorable) self. It was her playing the iconic role of Sandy in Grease, the "good girl gone bad". Again, note the sunglasses. 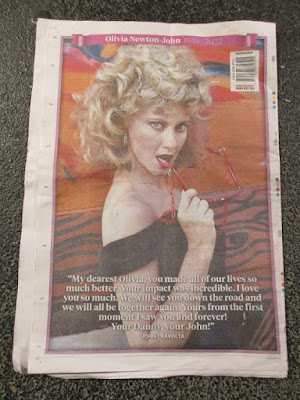 They were of course pinky-purple. There are rabbit holes to do with the symbolism of that colour that I've covered in many blog posts and videos.

That definitely ties in with the whole black sun idea. IMO it's also got a lot to do with her "death".

Maybe I've gone way OTT with my dot-joining in this post. But remember that the mainstream media are ultimately controlled by a death cult. They will use significant events related to iconic figures to push a preferred narrative as well as drop their fave symbols into the minds of the masses.

These days, everything's a psyop. It's all a ritual as well.

Posted by MattHaydenAU at 1:33 PM