There are so many horrible events in the news these days -- and often involving violence against children -- that I suspect most of them, or at least some, are engineered as part of this long rolling psyop to push us into a totalitarian hellscape being run by the creepy cult that rules the world.

Of course the totally corrupt globalist-owned mainstream media are over the moon whenever these crimes are committed. They clearly desperately want to maximise the trauma they cause and spread it far and wide. 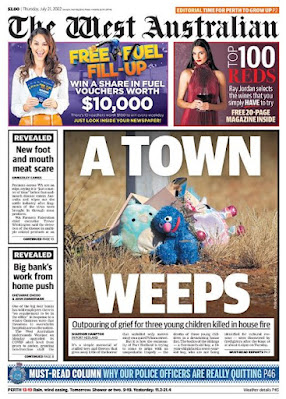 Then there's the symbolism. The coverage of this latest tragedy in Port Hedland, in which three kids were burned alive, featured the pervasive pink, purple and heart imagery. There was also a lot of blue, a noticeable pattern that's emerged in recent months. 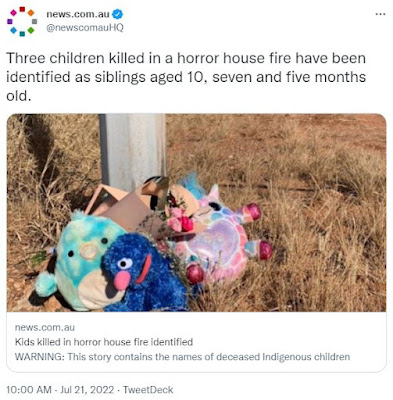 You can see the flowers in the inset photo below as well as above. That's a recurring motif that I think has much to do with the pink drug that dare not speak its name. (Please check out the video embedded below and you'll see just how obvious these patterns are now.) 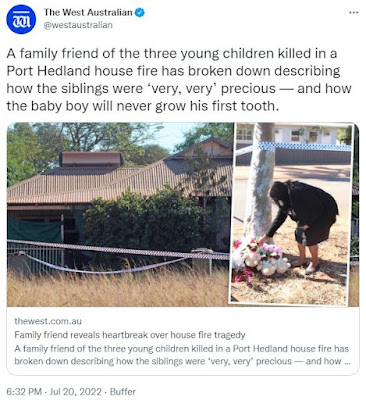 Note how in the photo below both figures wear blue. A woman in the inset has a pink top on. 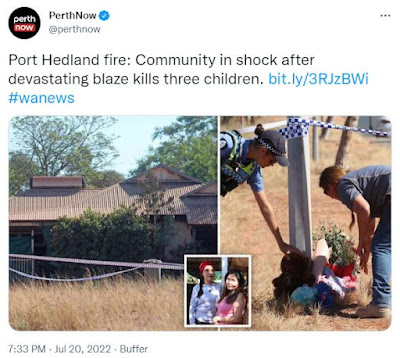 Blue is dominant in this shot as well. Look at the bright pink of the woman's headwear, and note that the bloke on the left is in a purple top. There are vehicles in both the fore and background. This could be meant to evoke the idea of traffic. 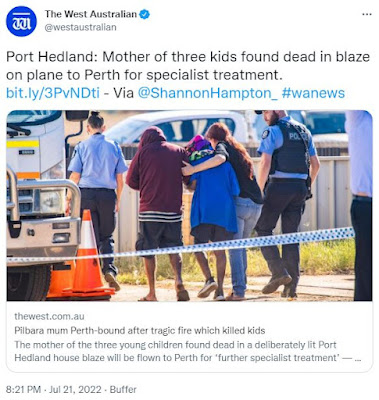 I know I'm looking forensically at this and joing a lot of dots that seem to be pretty far apart. But after many months of closely watching the MSM I'm absolutely sure that these motifs exist and are placed very carefully in the stories.

The social media streams of the various lie factories are particularly good places to discern them since the updates are so concentrated.

I'm not saying that these horrific acts aren't happening. I just suspect that they're being engineered in many cases. The Cabal has form for carrying out false flag attacks and blaming them on patsies, after all.

I think that they are often ritual sacrifices and the ensuing MSM coverage functions as a kind of symbolic incantation. The Port Hedland tragedy looks like a classic example of this process.

It brings to mind another traumatic event in Western Australia -- though this time with a happy ending: the Cleo Smith abduction saga. I'm sure I'm not alone in concluding that the whole thing was suss as. Whatever actually occurred, the MSM narrative was a giant, steaming crock of BS.

Another very suss story was this one out of West Leederville. 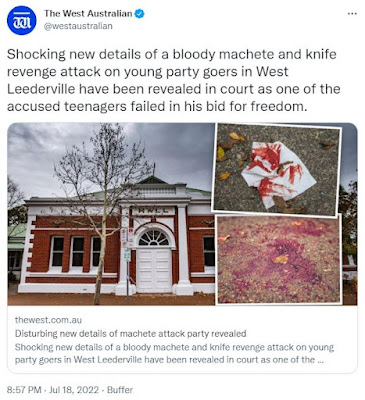 Again this involved youths and horrific violence. I thought the location was notable. My first impression was that the building had strong Masonic vibes emanating from the two pillars out front. I did some preliminary research and it does appear that the hall started out as a Freemason lodge.

Look closely at the inset photos. You've got the red and white and the pinky-purple of the blood spilled on the ground.

This looks like another symbolic incantation to me. If you think that local Cabal-creeps couldn't engineer something like this then you haven't been paying attention. Globally they've still got many millions of people walking around in face diapers for no good reason, remember. They are experts in mind control without a doubt.

I suspect that for these evil arseholes triggering youths into an act of savage violence, or manipulating an emotionally exhausted woman into burning down her own house would be a doddle.

Posted by MattHaydenAU at 7:05 PM