Now they are demonizing kids

Every day, squillions of things happen. If you're a newspaper editor there's an immense range of horrible events to choose from to cover in articles and put on the front page. So what you decide to feature says a lot about how you want your readers to see the world.

The covers are particularly significant in this regard because they have the most impact and reach. And they are seen by millions of people who don't even buy the paper.

I thought this recent cover of the West Australian said so much. Firstly, there was the obvious one eye symbolism. It was also a horribly gory photo of a bleeding eye, which they savoured, no doubt.

It was revealing that the very young age of the alleged perp was seen as the most important aspect of the story. The headline seemed to cry: "What's the world coming to? Surely we're in a kind of hell when stuff like this happens ..." 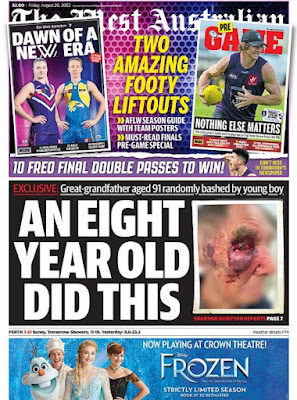 Note the section at the top of the cover. There's that pinky-purple theme you see so often along with the headline "Dawn of a New Era". This seems to reinforce the idea that everything's changed forever, with no turning back. The old normal is gone. We're in the new normal now.

Back to the age of the kid blamed for the assault: I thought this story was relevant to that theme. 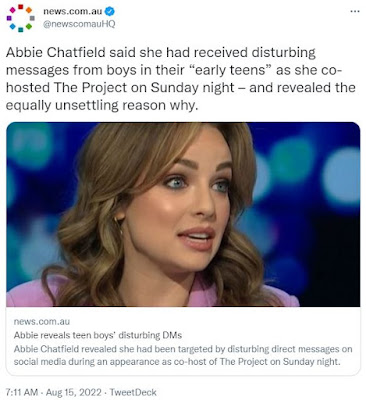 The Project is a truly sinister TV program. The name itself gives the game away. A project is like an operation, as in psyop. It's a very slick mind control tool of the Cabal.

IMO the daft, vain sleb above has been used to subtly promote the idea that kids are evil.

She and the other dopey panelists sheet home blame to Andrew Tate as well. So it's a twofer.

I reckon none of this is happening by chance. It's all orchestrated. The globalists running the MSM actually want to demonize kids. It's all part of their plan to "defeat God" so they can rule over all of us completely.

There's a strong rock spider element in this as well. It's like the flip side of the grooming they practise using the rainbow crowd as a vehicle.

If they convince the masses that kids can be just as evil as adults then they'll be able to get away with the idea that sex with them is no violation of innocence.

Another example of this conflation trick is outlined in the video below.

Aussies, check out these freedom rally postcards as well as the T-shirts linked here!

Posted by MattHaydenAU at 2:42 PM