Pretty clear to anyone capable of critical thinking that there's something really suss about the sudden deaths of so many slebs and sports stars lately.

I think that the you know what may be to blame in some cases. But for many of the most well known and revered folk I doubt this is the case. They would have been given placebos, surely.

Whatever's going on, the MSM can't be trusted to tell us the truth. When it comes to some, if not most, of these tragic passings, the official narrative is rolled gold bollocks IMHO.

Like when Warnie keeled over just after Rod Marsh ... And now we've had the female, musical mega-star double whammy of Judith Durham and Olivia Newton-John both buying the farm (or ranch, in the latter's case).

FFS, what are the odds?

Real journos would be deeply curious about all these events and do some serious digging. But we don't have any in Australia now. They're all globalist narrative peddlers and fake -- or controlled -- opposition. Sad!

They just dribble the usual platitudes like Chris Kenny did here. 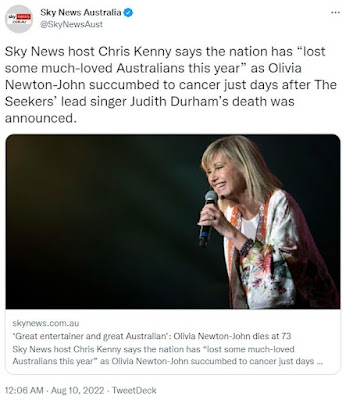 I suspect that many journos have a pretty good idea of what the real story is, even if they're not clear on the details.
I think there's something enormous going on behind the scenes that they are too terrified to tell us about. But they are dropping hints about it to their creepy mates.
There's certainly been heaps of occult elite symbolism and related weirdness in MSM reports about ONJ in particular. Much of this one on Sunrise silently played scenes from some show she was in about Port Arthur (pre-massacre, obviously) in the background.
She emerges from a "punishment cell" and stands behind the bars. Producers had countless hours of footage of her performing beautifully and chatting charmingly at their dispoal. So why make such a dark, strange editing choice? 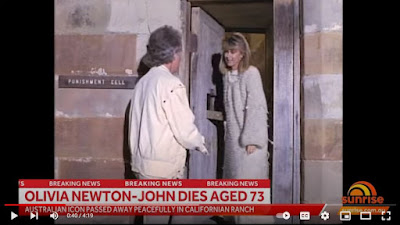 The Failing Terrorgraph often puts symbolic incantations and specific comms into their pages. They sometimes even appear in the toons. This video has a very clear example of this.
The one about the deaths of Durham and Newton-John was a case in point. 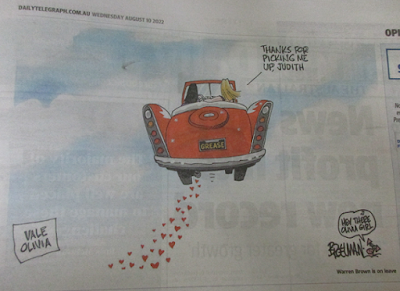 Why the car? And why have Judith Durham driving it?

Check out the little heart emojis coming out of the exhaust pipe. Are they saying the automobile runs on liquid love, or maybe another fluid? Well, petrol is kinda pink, after all ...

In what way is this image, a flying car seen from behind, reminiscent of the movie Grease?

The flick that first came to mind for me was Thelma and Louise, about two sassy chicks who fell foul of the long arm of the law. Even if you haven't seen it, you prolly know about the climactic scene in which they're surrounded by coppers on the edge of the Grand Canyon.

Rather than surrender to them they (anti)heroically drive off into the great blue yonder together, kind of like a chick version of Butch and Sundance.

Think the cartoonist was tryna tell a certain, select audience something ... or nah?

Posted by MattHaydenAU at 1:30 PM