George Brandis sooking up about her disrespect for the misogynistic garment (and thereby Islam itself) was much like Piers Morgan ordering Tommy Robinson to respect the Koran. Just afterwards George and his erstwhile opponents who applauded him probably thought their impassioned display of cultural sensitivity would persuade the plebs to their way of thinking (or rather, feeling).

IMHO it did the complete opposite. Brandis showed that he'd been swallowed by the monster called political correctness. He was now just another one of the Islamists' bitches. (Sure, we already knew that about the Greens and Labor. But for Brandis, who'd previously cast himself as a warrior for Western values and free speech, this was a revelation.)

It was interesting to see the media reaction to Hanson's stunt. Of course you'll always get a contrast between News Ltd and Fairfax. But on Friday it was particularly pronounced. 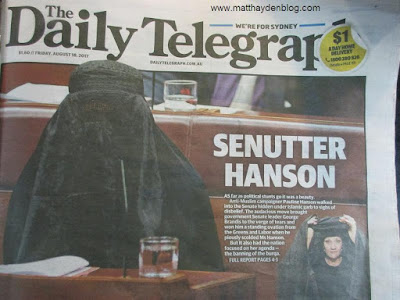 The Daily Telegraph could see what it was all about. Her "crazy brave" stunt was effective in keeping the nation focused on her agenda. 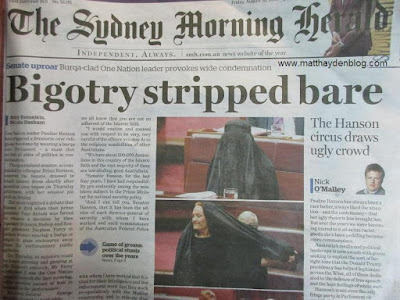 The tragic hand-wringers at The Sydney Morning Herald did what they usually do, which was to look down their noses at Hanson and sneer up a storm about bigotry and white men.

They really haven't the slightest clue.

My initial thoughts on the stunt, the day after it occurred: