Sure you've all heard that the so-called "tent city" in Sydney's Martin Place has been removed. I don't think I'm alone in saying I'm glad this episode is finally over.

That's not just because of the camp's physical existence, mind. Didn't seem to be any kind of public health threat. And I walked through it many times and was never hassled for money.

That said, I can understand why the NSW State Govt pollies were so infuriated by it. It was like a bloody great middle finger plonked right on their doorstep.

And it was the political exploitation of it that annoyed me most, I've gotta say. Clover Moore, in particular, was pretty dishonest in the way she handled the issue. She could have nipped this problem in the bud but chose not to. She let it fester and milked it for a while. Then when the simplistic narrative she and her fellow travellers were pushing slowly collapsed (in major part due to its "Mayor" Lanz Priestly being revealed as a less than savoury character) she finally acted.

Anyhoo, I managed to lob there a coupla times on Friday and took some photos. 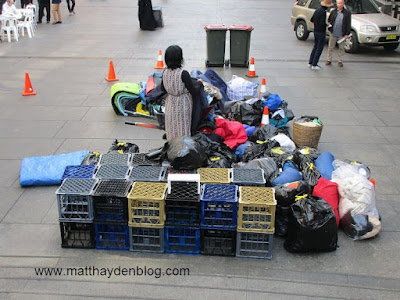 Interesting how even in a makeshift homeless camp, women end up doing the laundry ... Bloody patriarchy is everywhere, innit! 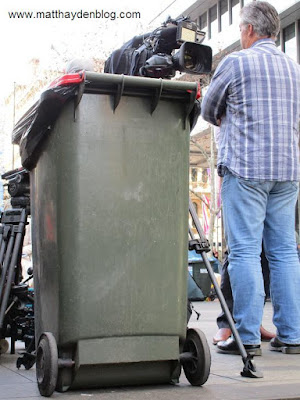 In this world of false narratives and fake news, I thought the placement of this camera was quite apposite. 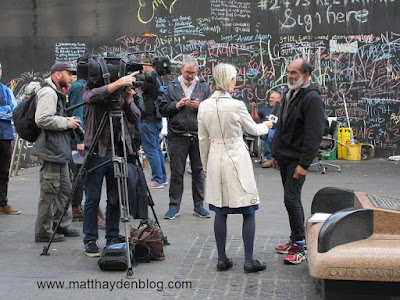 Speaking of fake news, this "reporter" interviewing the "Mayor" was from their ABC ...

So, while I didn't hear what was said in their little chat, I suspect it was composed of the usual compassionista questions meant to elicit bolshie boilerplate about society's indifference to the downtrodden, etc.

Also, I'm willing to bet there were no hard questions of Lanz about his criminal record. And let's face it, including at least one or two would have been what a real newshound would've done, surely. 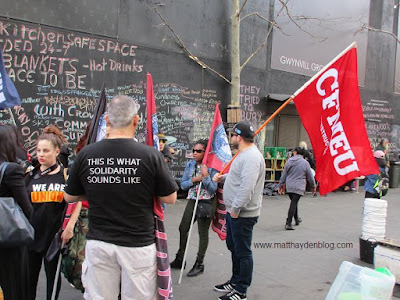 Notably, this group seemed to be the only organized political one present, at least when I was there at about midday. 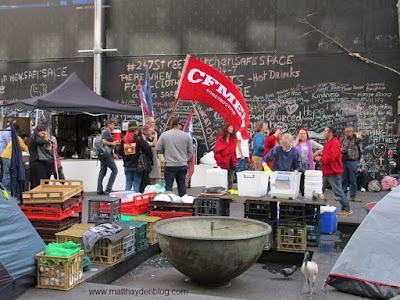 Again, women do the dishes while the men stand around lazily waving flags. Where's the AHRC when you need 'em! 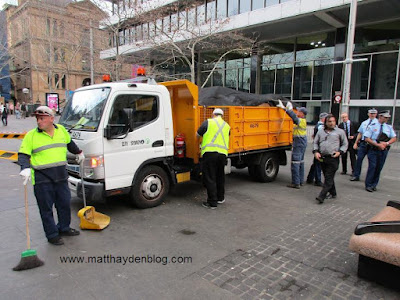 I returned later in the day when the crowds were gone and council workers were doing the final cleanup. 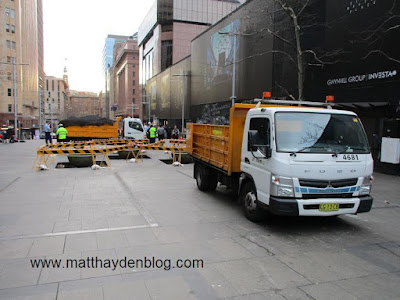 These trucks did have City of Sydney logos, by the way. So why didn't Clover Moore send them in much earlier? Fact that she didn't does not reflect well on her IMHO. 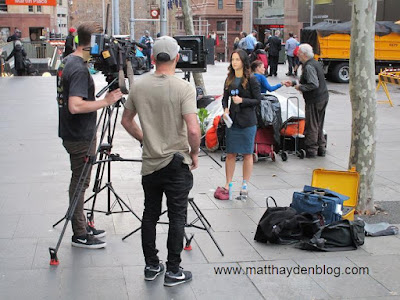 Media still there! Gawd, they're such parasites, aren't they? Just hanging around until the bitter end, milking it for all it's worth. (Though I suppose that includes yours truly, too. Posts like this prolly qualify me as a "citizen journalist" or something ...) 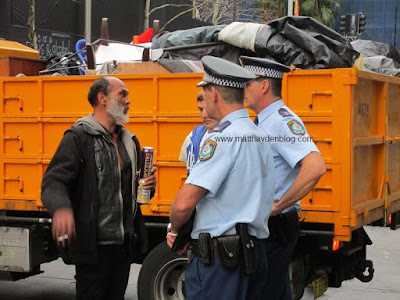 Lanz was still there, holding court with the local constabulary ... If you look closely at that shot you'll see he's actually got a can of Rockstar energy drink in his hand!

That gives me a laugh. He certainly emerged as a compelling, central figure in all of this. And I think it's likely we'll see another similar production with him in a featured role down the track. 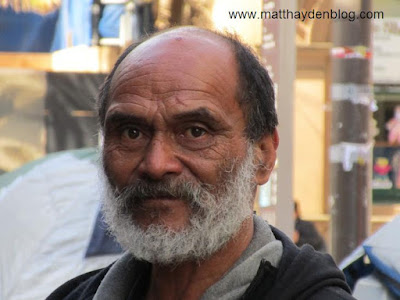 Posted by MattHaydenAU at 3:42 PM