Sam Dastyari is surely Australia's most shameless media tart. Remember his cameo in The Killing Season, in which he actually played himself taking an ominous phone call about Kevin Rudd?

He's obviously got lots of MSM chums, particularly at their ABC. He just appeared on Australian Story in what many have said was a puff piece to help him flog his book.

Without a doubt "Dasher" is one halal of an opportunist!

Given how much news coverage the Martin Place homeless camp has been getting lately it's no wonder he's tried to milk it for sanctimonious cool points. He lobbed there recently and made an excruciatingly self-serving and disingenuous video.

In it, he uses the usual fraudulent leftist tactic of misrepresenting his opponents, casting them as cruel, heartless bullies. For example he accuses conservative politicians and commentators of "kicking the shit out of" the homeless.

What absolute bollocks! They're not blaming the victims; they're arcing up at Clover Moore because she, not unlike Sam himself, seems to be exploiting the situation to further her own agenda.

Without irony he says the camp itself is "offensive". Alright for him to use such a description. But if a righty were to do so I'm sure Sam and his fellow travellers would be quick to cite this as evidence of their meanness.

Needless to say he offers no detailed solutions, just mouths some meaningless motherhood statements to make it look like he gives a shit.

Oh, well, at least he wasn't the only scavenger there. There was also this guy, who was just more honest about his intentions ... 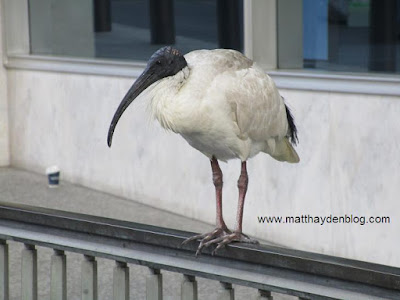 Posted by MattHaydenAU at 11:59 AM