So it looks like the homeless camp at Martin Place is finally being dismantled after all. That's a relief. It's also surprising because it looked like it was gonna continue indefinitely. It really was a soap opera ... without the soap.

Obviously things have been happening behind the scenes that have brought this about. I suspect one contributing factor was the recent reporting on the unofficial "Mayor", Lanz Priestly.

Some assiduous journos looked into this guy's past. If that's any guide to a man's character, and it usually is, then he's a long way from the "salt of the earth", "man of the people" that he purports to be.

This is significant. The whole saga was a war of narratives as much as anything else. The story that the activists wanted to promote was that all the tent city's citizens were there by no fault of their own. And goodhearted Lanz managed to bring them all together to create this warm, friendly, fully functioning community in which the members helped each other out. 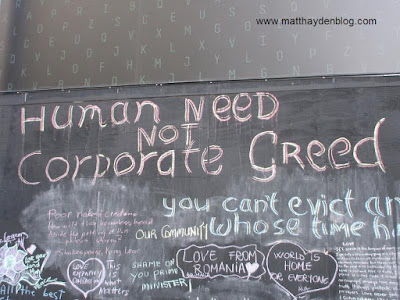 The graffiti on the walls reinforced this narrative. It's all about love, altruism, generosity and compassion. And it's very easy to accept this if you don't know much about what's really going on.

To be honest, that's what I did at first. I walked through there a couple of time and was actually kinda charmed by the place.

But as the political argy bargy continued over the last several weeks it became clear it was not just a simple tale of the poor have-nots coming together to create a community and demanding that their human rights be respected. It's been engineered and manipulated by certain individuals and groups with their own agendas. And I don't think any of them have been entirely honest!

Clover Moore, for example, said she didn't want to have the plods come in and move the homeless because that would've been cruel. But that's bollocks. She used the situation to embarrass the State Govt. She leveraged it to try to pressure them into building more "safe spaces" for the homeless. That's not a bad thing in itself, sure. But she was still being disingenuous.

And you've gotta wonder what Priestly's ultimate goal was. Maybe it was just ego gratification more than anything else?

So, there were a whole bunch of submerged stories going on here. As with any political issue, most of what you saw was theatre. The truth was never quite what it appeared to be on the surface.

Posted by MattHaydenAU at 11:58 AM