Central Station, platform 19: seeming false alarm ... What was it about?

Just got home on the train from the city. While I was on platform 19 at Central Station (5.30-ish) something interesting happened.

A bunch of policemen had assembled on the platform, including what looked like special riot cops (you know, the ones in dark blue gear, who tend to look bigger and tougher than most). There were at least ten of them, maybe more. 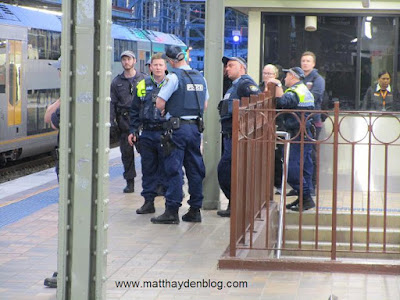 A few minutes before the Homebush service arrived, they waved dozens of passengers back from the centre of the platform. At first I thought they were closing down the whole thing, but no. They were just clearing out a section of it. I assumed this was because there were some unruly passengers on the approaching train they had been warned about and they were ready to apprehend them.

Anyway, just before the train actually arrived they disbanded and left the platform. So, it appeared to be a false alarm.

My suspicion was confirmed because as the train went through the next couple of stations an audio message, accompanied by text, played repeatedly. It basically warned passengers not to make false emergency calls, and that if this was done it could "result in a fine". 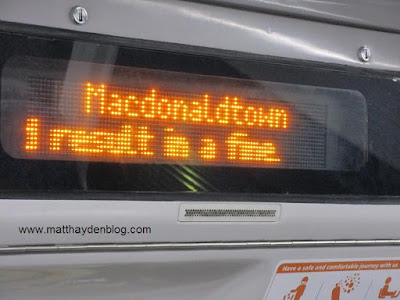 This is the only time I have ever heard (and read) this message ... So, seems likely someone was just pulling a prank. If so, they must have made a pretty serious claim. Otherwise, why so many cops? (If it were just some bogans being arseholes, then surely only a few officers would have sufficed.)

Given that several people have just been arrested here over a truly terrifying terror plot, I couldn't help thinking this might have had something to do with it.

I might be waaaay off, of course. But it will be interesting if any mainstream media coverage of this incident follows -- and if so, what it was all about.
Posted by MattHaydenAU at 4:54 PM