Sydney is a very big, chaotic city. So terrible things happen here pretty often. And these occasionally occur in places we all know pretty well.

Take that police shooting recently in Central Station. Apparently some young bloke afflicted by mental illness attacked a florist with scissors. He was fatally shot by police.

Obviously I have no detailed knowledge of the incident. But it sounds like it could well have been a case of "suicide by cop".

Well, whatever precipitated the original attack the outcome is very sad ...

In any case, when I initially learned about it I realized the location of this tragic event was somewhere I'd walked past hundreds, if not thousands, of times. It was even included in a photo I took a few months ago. You can see it in the bottom left hand corner. 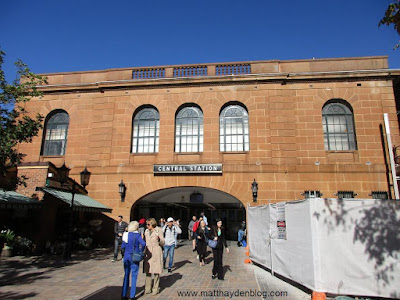 Looking at that scene you think: How could anyone have predicted that such a bizarre act of ultimately fatal violence would occur right there?

Needless to say, there's no way anyone could ...

So often these things happen completely out of the blue. You cannot prepare for them. So I suppose you've just gotta keep getting on with the gig!

That's definitely what the florist himself has done. He seems like an exceptionally resilient old bloke.

I think you can even see him at work in this very quick video I took of the scene yesterday. By then everything appeared to be completely back to normal -- just like in the photo above.

Posted by MattHaydenAU at 12:55 PM