As we approach the date for the postal "marriage equality" plebiscite the tactics of the "yes" crowd are becoming increasingly desperate and aggressive ... The whole thing has been an eye opener for a lot of people. Many are beginning to realize that the term "rainbow fascist" is not all that OTT after all!

There have been many cases of their intolerance and bullying -- such as demonstrators haranguing the seniors in Melbourne, and Tim Minchin's hateful song sliming the whole country as homophobic.

But their obnoxious intolerance of different viewpoints is hardly surprising. As with so many causes in identity politics, same sex marriage advocates are totally obsessed with themselves and completely oblivious to the plight of other groups -- even other minorities.

I witnessed an illustration of this recently at Sydney University ...

See, I'd read that there was to be a "marriage equality" demo there so I lobbed to have a look. It was at the Fisher Library, and on my way there I saw a Mariachi band playing. They were accomplished and about twenty or so students had assembled around them to enjoy their music. 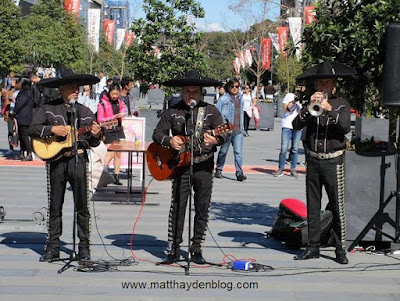 Given the demo was on a university campus I assumed it would have a massive turnout. But actually there weren't that many people there. Also, all the three speakers I saw were white and male. (Sure, I wasn't there from the very beginning, so there could have been other speakers from different groups. Still, I thought this was telling given the PC Left's claims of being so "anti-racist" and all.)

These guys blathered on as expected about how hateful, cruel and intolerant the opposition were, and how it was so important to talk your friends into voting "yes", etc. Then they started their shouty little march across the campus.

As you can see from this short video, they ploughed on towards the band pictured above. You can actually hear the Mexican music near the end of the clip.

Rather than show respect to the performers, the demonstrators just kept chanting regardless until the three amigos had no option but to quit playing. (The video embedded below shows the band's bewilderment in the immediate aftermath.)

Now, I know these guys didn't constitute a counter demo. But they certainly still symbolized a minority culture. And it was quite telling how completely indifferent to them the gay marriage demonstrators actually were.

Would they have stopped shouting if they'd encountered a performance of Aboriginal music, or a speech by an imam keen to dispel myths about his religion? I seriously doubt it.

It was just a little episode, sure. But it seemed to encapsulate the bloody-minded self-obsession of the SSM crowd. And it thereby illustrated the inherent risk to social harmony of identity politics generally.

Clearly, if people identify primarily as members of oppressed groups and demand special rights and privileges they will inevitably clash with others like them. The loudest, most determined and privileged of these will happily steamroll the others, confirming how fraudulent their claims of solidarity with them truly are.

Posted by MattHaydenAU at 11:39 AM