The politically correct Left are nothing if not predictable. They are one trick -- or rather, two trick -- ponies. Basically all they've got are deceit and intimidation. They lie, then they bully. Lie, bully ... Rinse, repeat. Rinse, repeat ...

One of their fave methods of deceit is to completely misrepresent political issues in highly emotive terms. By doing this they block thought in the impressionable, while simultaneously appearing to be presenting some sort of compelling case.

The “Vote Yes” campaign is a classic example of this. They say the issue of same sex marriage is only about love and equality, when any thinking person knows it's far more multifaceted and complicated than that.

But by simply repeating the "love" mantra, they neatly sidestep even having to acknowledge -- let alone try to rebut -- the “no” case. And no wonder. If they actually did try to win fair and square by actual argument they would lose resoundingly, and deep down they know it.

They also get to demonize their opponents which -- being the fascists they are -- they really get off on. This behaviour is disturbingly hateful, of course. And given that they're promoting themselves as the “loving” folk, it is highly ironic to say the least.

But they're so emotionally infantile and lacking in self awareness that they can't see the contradiction. It's hatred in the service of love, so to these child-brained muppets that not only makes it okay -- it makes them even more loving still!

Here's an example. Not that far from where I live are three houses adjacent to each other that have identical signs out the front. 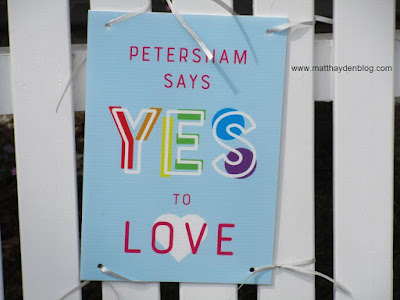 Firstly, there's the focus on love. That's disingenuous, thereby mildly deceitful. What it really means is “Petersham is for Marriage Equality”. That too is false because even though Sydney's Inner West is chockas with brainwashed pro-SSM types, there are still some who have and will vote no. I'm one of them.

So, the poster proclaims an obvious falsehood and is thereby deceitful in another way.

Now, this isn't overtly intimidating, sure. Still, it reeks of ostracism, and thereby constitutes a subtle kind of bullying. That's because it implies that if you're not for "marriage equality" you don't really belong in Petersham.

And the arrogance is astounding. I mean, FFS, what right does anyone have to brazenly announce that everyone in their suburb does (or rather, should) be on one side of a highly contentious political issue!

Doubtless, there are far more people than they know living in their midst who don't subscribe to their rainbow fascism. Reason they're none the wiser is that, unlike them, sane, rational adults tend to keep their political views to themselves -- in major part because they actually consider the feelings of socialist snowflakes and don't want to trigger them into narcissistic tantrums by plainly stating their belief in the law as it presently stands.

And it was so telling that they were three of these signs all in a little patch. Yes, in federal, state and local elections people do place ads for their favoured candidates in their front yards and on their gates and letterboxes. But I have never seen three in a row!

Granted, the political make-up of the Inner West means it would not be unusual to find three ardently PC households one after another in the same street. That said, the odds that they all independently went out and bought exactly the same sign are next to zero, surely. So one of the group must've actually knocked on the others' doors -- maybe with said promotional material already purchased and in hand -- to suggest they do the same for the cause.

Now, I would never dream of doing anything like that, no matter the circumstances. And if someone did it to me I would be very unimpressed. Even if I knew my neighbour well enough to talk about politics and agreed with them on most issues I would still consider them suggesting I should place, say, a poster on my front gate just flat out rude.

But clearly, this kind of behaviour is par for the course with the Left. Says heaps.

Interestingly, also in Petersham a somewhat less wholesome sentiment related to traditional marriage was discovered recently, this time inside a building. A sane, rational adult would conclude that this further discredits the claim that "Petersham says yes to love”. But that's not the kind of person who would show that infantile sign, obviously. More likely, they would see no contradiction at all.

Posted by MattHaydenAU at 2:29 PM