As the "marriage equality" plebiscite draws near it's very clear that the "yes" side are packin' death. They've been pulling out all the stops with their deceit and intimidation tactics lately. This is because they are terrified of the "no" side being able to get their arguments heard by most Aussies. If this happens and voters are provoked into thinking seriously about this issue, the pro-SSM side will likely lose. And they know it.

So, they continue to keep things as emotive as possible. They blather that "love is love". And how could anyone be against love? Well, you must be a hater then!

That may seem like an argument but it is anything but. It's actually a very effective thought blocker. And blocking thought is the main aim of the PC Left. Once they've managed that, it's sooo much easier for them to manipulate people into buying their lies.

And this tactic is employed visually as well as verbally. Take Clover Moore's shameless campaign in support of SSM. There are rows of pretty red flags exhorting us to "Vote Yes" hung in Martin Place and Circular Quay. And there are other installations such as the one shown below in Pitt Street Mall. 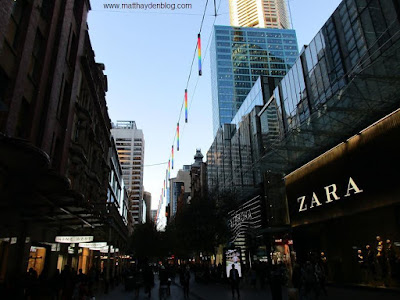 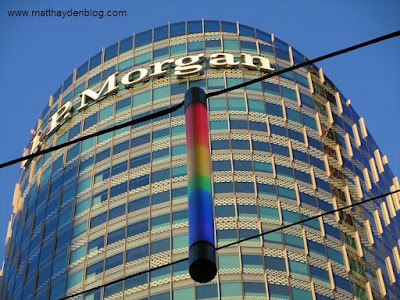 The Town Hall itself is being lit up at night. 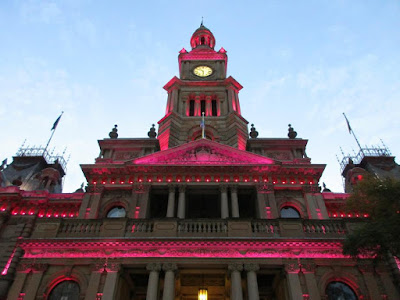 Each evening, a different colour is displayed. 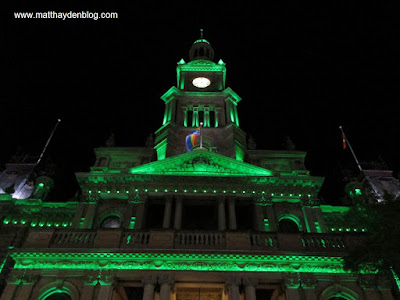 These visual effects are certainly very appealing. There's no denying that they evoke a strong emotional response, even in a flint-hearted Tory such as myself! So I certainly respect the work and skill that has gone into producing them.

Still, in the end, when you actually think about the issue, they constitute more evidence of the paucity of the "yes" case. They are a desperate attempt to dazzle Sydneysiders into accepting a massive, irreversible change to one of society's main foundations. Which is why this eye candy -- not unlike the real stuff -- ultimately leaves me feeling queasy.