The main feature of the push for "marriage equality" in Australia has been its overwhelmingly emotive nature. Its advocates hardly ever even attempt to argue their case in the usual sense. They tend to repeat this line that marriage is about love. And there's no denying that gay people are capable of loving each other, so how can you deny them marriage?

This has long been their tactic. Take this ad for the Greens that I saw in Perth several years ago: 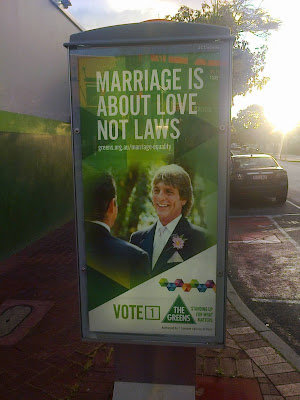 That cracked me up when I saw it. First thing I thought was: Well if it's "about love not laws" why the hell do you want the law to be changed? I mean, why can't you be "married" in spirit without needing the official documentation?

Their approach is undeniably irrational. But it's been very successful. Its proponents have managed to draw many "undecideds" over to their view by using it. They now completely ignore the "no" case because it's based on a different, more thoughtful premise: while love is a big factor in marriage it's also about many other things such as the welfare of kids, social stability, and religious freedom.

So, heaps of people have bought the whole "love is love" line. For some, so complete is their commitment to this highly emotive position that they believe any questioning of it at all is must be against love itself! 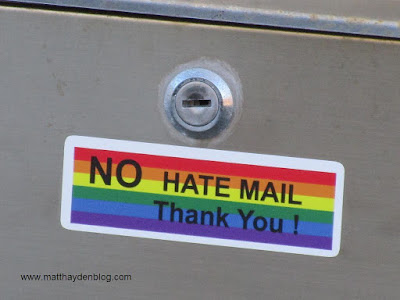 Living in Sydney's inner west, I've seen quite a few stickers like this. Many of them refer specifically to the plebiscite itself.


I find this quite astonishing. Imagine being in such a permanently emotional state that you believe a flyer describing an opposing view -- something you'd wanna have in a democracy, surely -- was hateful in itself!

Though really, I shouldn't be that surprised. The PC Left has been honing this method of indoctrination for decades now and they're very, very good at it.

Basically, what they do with their pet positions on big issues is to associate them with positive emotions (love, joy, compassion, etc). By constant repetition they manage to con their followers into believing that their views are simply beyond reproach; that any deviation from them necessarily makes you a bad, hateful person.

Oh, and you're undemocratic as well ... 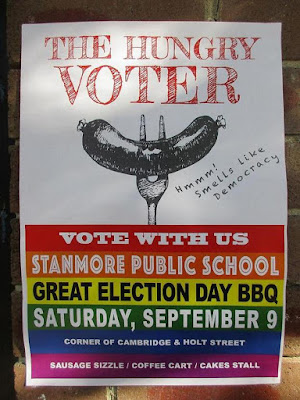 I saw the above poster yesterday. I thought it was so telling.

FFS, it's advertising local elections, explicitly extolling the virtues of democracy. Yet it invokes the trademark "marriage equality" rainbow in its very design! 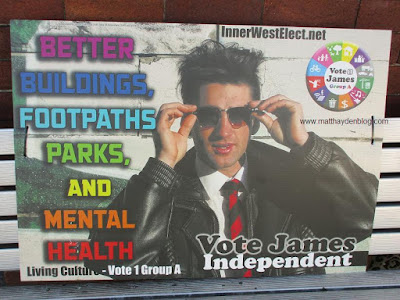 Here's another example from one of the candidates. He doesn't refer to the issue specifically on his poster, but still includes the same colours.

Now, I know the plebiscite is not a local issue. So it won't be contested by candidates.

Still, isn't it interesting that it's alluded to on both these posters. It's kinda code for: "Hey, hipsters! Of course we're all good people who believe love is love, natch!" It's so dumb, like Julia Gillard saying "we are us".

The irony is that same sex marriage is not above politics; it's as political as an issue can be. And incredible as it may seem to the people behind these posters, there are actually inner westies who will be voting "no" in the upcoming plebiscite -- if it is actually held, that is.

But you'd better not tell them that. They'll think you're a bad, hateful person if you do.
Posted by MattHaydenAU at 12:13 PM