Not at all surprised that a “Vote Yes” campaigner headbutted Tony Abbott in Tasmania. And while that event on its own will convert many people to the no side, the ensuing tsunami of putrid abuse from the Twitter trollective and hordes of malicious muppets elsewhere on social media will magnify that effect substantially.

While it was clearly an ugly event, in the end it was kind of a net positive for sane, rational adults. Ultimately it may not be enough to ensure that the no vote wins. But it's certainly made it more likely. Definitely a good thing.

The vicious, cowardly attack itself was actually a microcosm of what the cultural Marxists have been up to all along. As Abbott described it, his attacker got close to him by saying he wanted to shake his hand. Tony, who tends to take all people regardless of political affiliation at their word, allowed him into his personal space, and that's when he was headbutted.

This stealth approach is what PC scumbags do every single time, and on a grand scale. They relentlessly present themselves as friendly, kind, loving and compassionate. They have a whole swathe of cashed up, influential allies including most of the mainstream media who reinforce this message for them. That makes almost everyone reluctant to resist their prescriptions from the start. But if you see through their lies and still stand your ground they'll tell everyone they can that you're bad, hateful person.

It's a despicable tactic. It's a heavily watered down but still loathsome version of what terrorists do in the Middle East. By launching attacks from civilian areas and blending into the population these murderous scumbags use the innocent as a shield. They actually like it when civilians on their side are killed by counter attacks because they can use these tragedies as propaganda.

Obviously what they're doing here is not nearly as putrid. But it still stinks. They keep pushing and provoking their opponents, desperate for someone to be attacked or vilified so they can cast all no voters as brazen bullies and their entire side as virtuous victims. About the only time this has actually borne fruit for them seems to have been in the attack on Kevin Rudd's godson. All the other examples of “homophobia” cited in the media have been yuuugely exaggerated, or seemingly flat out concocted by those sympathetic to the "marriage equality" cause -- such as that poster hoax in Melbourne.

The false narrative they've been promoting has been gradually exposed over recent weeks. Spookily, amendments to the graffiti on this wall in Newtown mark the changes ... Got this shot of it at the beginning of September: 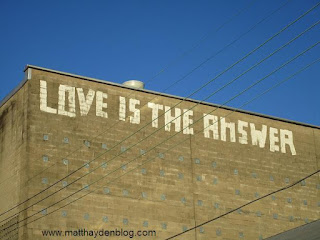 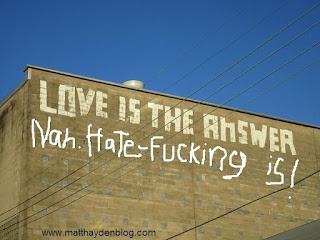 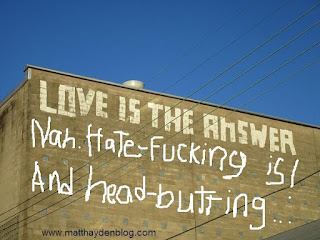 These days, anyone with eyes to see knows that the “love is love” crowd are a massive pack of sneering frauds. "Love is hate" more like ... Because of their vicious dishonesty, rainbows will stop evoking feelings of joy, goodwill, compassion and renewal in the hearts of many Aussies for quite some time. God, Gaia or whatever celestial force ultimately creates them is gonna be seriously pissed off!

The malignant narcissists who've so thoroughly trashed the rainbow brand should've chosen a dark, vengeful thundercloud as their symbol instead. Woulda been way more honest!
Posted by MattHaydenAU at 1:23 PM