Orlando shooting vigils and flags are useless. LGBTI folk must wake up!

Depressing, but not surprising, that in the wake of this latest mass murder by an Islamist in Orlando, Florida, countless journalists in the mainstream media have been wondering what on Earth could have been his motivation, and framing the horrific event primarily as a gun rights issue ... And I dunno about you, but I'm really starting to get pissed off with these candle-lit vigils, laser light shows, and flags flown at half mast that inevitably follow each gruesome, evil act by or in support of Islamic State.

I know that these events and gestures are cathartic for the participants. That has some value, I suppose. But the fact that emotional expression seems to be their main function is exasperating -- and a bit alarming.

It looks very much like the people who feel most compelled to perform these rituals don't actually get that the horror is real. If they did their first and main aim would be to stop it from happening again, right? But there's little or none of that. You just get a farrago of sanctimony and virtue signalling.

It's as if they're watching an epic movie about the triumph of the human spirit. You know, the kind where you go in, sook up, and walk out filled with goodwill to all men -- er, and women, and the remaining 50 odd gender identities, of course ... You ruminate on the power of love, compassion, forgiveness, and all that other crap. Emotionally revitalized, you resolve to emulate the flick's heroes and live a selfless, spiritual life from now on ... But next day you're back to being the same cranky, petty schmo you always were. 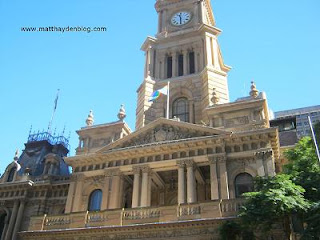 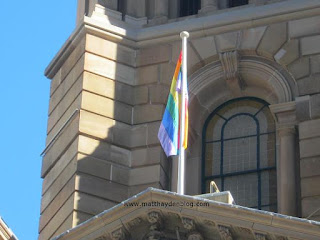 As well as in symbolic actions such as the rainbow flag flown at half-mast at Sydney's Town Hall, shown above, you see this daffy, dippy emotionalism all over social media.

Soon after the Pulse Nightclub massacre story broke, various wishy-washy hashtags started to trend. #WeStandWithOrlando? No they don't. #LoveWins? No it doesn't. #StopTheHate! Well, I wish them good luck with that one ...

There were others like #GaysBreakTheInternet and #LoveIsLove. Needless to say, they didn't mention the, er, caliphant in the room. It's as if Islamic homophobia is not unlike homosexuality in Oscar Wilde's day. It's the hate that dare not speak its name.

There have been many calls for reformation in Islam. I reckon there should be one in the LGBTI community too. They need to realize who their real enemies are. Because right now, they really are like lambs to the slaughter.

(Speaking of which: There's an influential Islamic preacher who says gays should be killed currently in Sydney. Combine this fact with the city's reputation as one of the world's most gay-friendly cities and you have a real recipe for disaster.)
Posted by MattHaydenAU at 12:01 PM