We all know what a unique and compelling figure Donald J Trump is. He is brilliant at triggering his foes, lefties especially. This is interesting, because he's actually not a heavily ideological character. He's a centrist; more pragmatic than anything else. The defining feature of his presidency is that he really gets things done. And he does what he says he's gonna do! That's almost unheard of in the history of politics the world over.

Lefties are the same the world over, too. So it's no wonder that the ones here in Australia find him as emotionally disturbing as they do in the USA. I first noticed evidence of his effect on them about three years ago now, just after he'd become POTUS.

As well as all the eye rolling and dark muttering in the local MSM, the poster below was a good indication of the extent to which he had invaded the local socialist psyche. 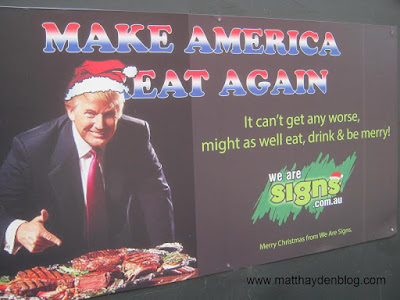 I saw this amusing installation in the window of a Chippendale cafe in March 2018. It seemed to perfectly illustrate that idea of him taking up room in their heads. This monstrous version of him inhabited a little loft all of its own! 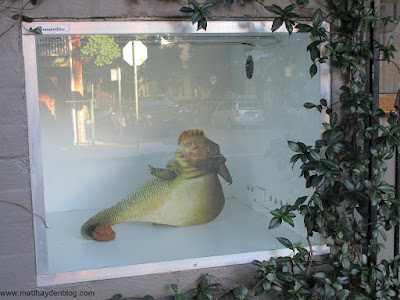 Even though it was meant to make him look absolutely repellent, I think it prolly had the opposite effect on many passers by. Hell, aside from all the POTUS poo, who wouldn't wanna own a funny, cheeky little critter like that? 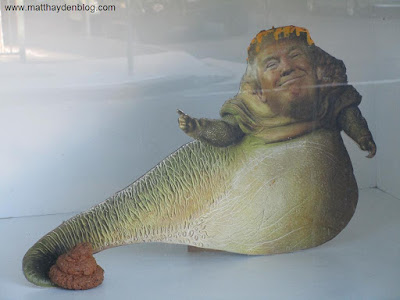 Recently I was in St Peters, another inner-west suburb of Sydney. It's a haven for graffiti artists and I noticed this creepy mural. 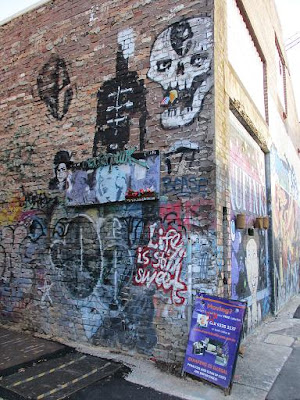 It included a small but colourful representation of Trump spewing the American flag. It struck me as being strangely apt given that he's fighting an evil, soulless cabal. They have a dark army of mind-controlled zombies who possess about as much human warmth as skeletons, and there he is, right inside the skull of one of them! 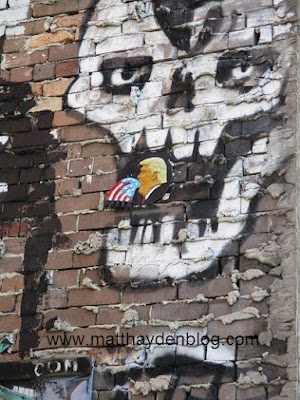 You see a helluva lot of TDS on their ABC's flagship lunar wankfest The Drum. The dude below is so seriously afflicted with it, he actually thinks that eye-gouging Trump with a fork is all fine and dandy, and that Jim Acosta is genuinely representative of a large swathe of the American people. Shows the extent to which he's been brainwashed by CNN. (Oh, and he's a doctor, too. So much for the pledge to "first, do no harm".) 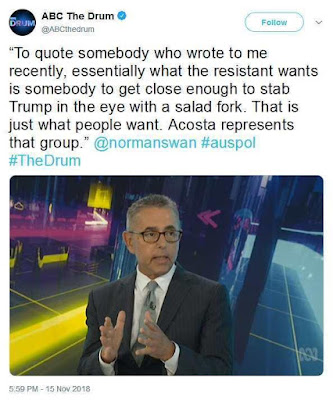 A "doctor" of a different kind -- but with the same view of Trump -- is Craig Emerson. This tragic quackademic and ex-Labor pollie has bloviated repeatedly on the same excruciating show. He's also the ex-squeeze of Julia Gillard, who, along with Alexander Downer, Julie Bishop et al gave many millions of dollars to the yugely corrupt Clinton Foundation. He dinkum reckons that the MSM is not biased when covering Trump. 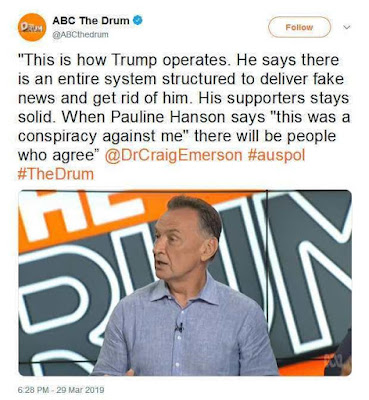 Poor Emmo is so gullible that he was convinced that the Democrats had a serious case against POTUS in their laughable impeachment campaign. He sees "Trumpism" as a major problem, and thinks it is damaging Australian politics. Sadly, it's actually his TDS that is, and it has seriously distorted his view of local issues. 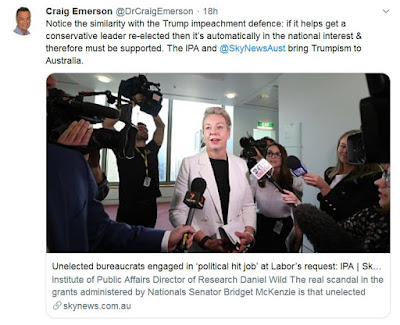 This bizarre delusion is shared by Michael Pascoe, a so-called journalist who obediently repeats the "Trump is nuts" line, as well as general male feminist talking points about the social toxicity of blokedom.

If he wanted an "I'm with stupid" t-shirt that accurately represented reality, this dude's dopey mug would be just the one to whop on it. 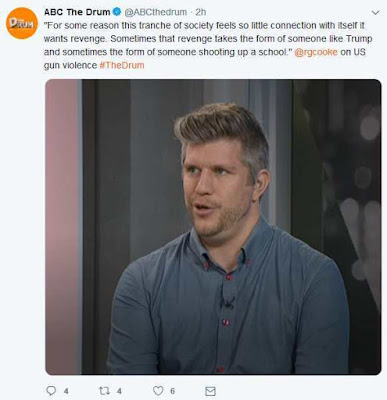 The tranche of society that he and his fellow sneering hipsters belong to has so little connection to reality that they think voting for Trump is akin to committing mass murder. And their ABC thinks that this is insightful commentary, then charges us all for its broadcasting!

His surname is Cooke, BTW. Append a "d" and it would describe him perfectly.

Hugh Riminton is prolly Australia's oldest, saddest media Ken Doll. This tweet from 2018 didn't age too well -- much like Hugh himself, actually. 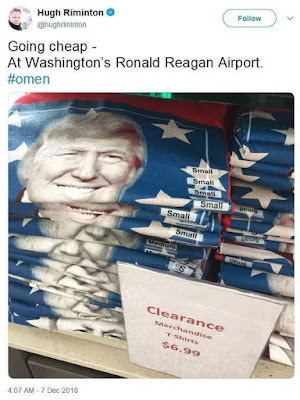 The guy is so simple-minded, he thinks that Paul Krugman's analysis of Australian issues is worth sharing. How sad is that? 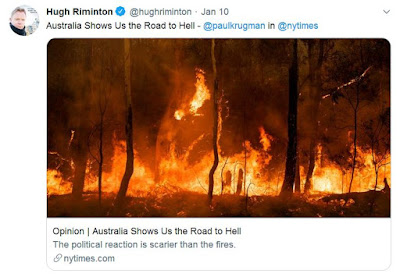 Let's hope nobody tries to Qanon him too! It's an ugly world out there, remember ...

(And just re Krugman's invocation of Biblical imagery to describe the bushfires: This was classic globalist, warmist psychological manipulation, and has been repeated many times in the local media.) 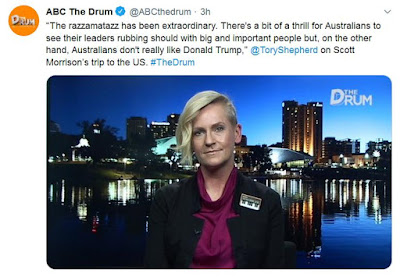 Already, millions of Aussies love Trump. And that number is growing daily. They can see that he's a total champ in the fight against the globalist deep state. We don't want to be American culturally. We just want to be ourselves, independent.

Like so many nations these days we've had an absolute gut-full of meddling by evil totalitarians who use cultural Marxism and climate change alarmism among other tactics to dumb down, stress out and tear apart our society in preparation for their top-down centralized control of us. POTUS is herocially standing up to this creepy cabal, and thereby exposing its sinister machinations for all the world to see.

So in a way, PVO below has actually got things right. Australia has reached a Trumpian moment in the sense that just as in the USA, the PC, "Orange Man Bad" narrative that he so obediently parrots has been exposed locally.

And yes, the public is already making its judgement of him and his fellow "journalists" in their coverage of issues that require transparency -- most significantly Aussie pollies' role in the coup against Trump himself. PVO and his fellow Mockingbird Media mouthpieces haven't even scratched the surface when it comes to this. Which is why the verdict is already a resounding guilty; guilty of peddling fake news!
Posted by MattHaydenAU at 8:24 AM