Why Aussies are so fascinated with American politics, Trump in particular

You may have read about this list of Australia's most popular Google searches last year. What's interesting is that even though we had our own federal election, the top term was “US election”. And searches for “Donald Trump” ranked seventh overall.

I don't find this at all surprising. American politics is waaay more compelling than what happens here. And forget the actual election between nominees. The primaries are high drama just on their own.

Democrats and Republicans endure an epic, extended, comprehensively covered slugfest between several contenders. The battle is not "no holds barred", but close. With all the showbiz effects in staging and coverage it's reminiscent of pro wrestling, although more authentic ... And when I say more, I don't mean completely. Clearly, quite a bit of it is staged, with winners being chosen by shadowy forces backstage. Take the disgraceful way Bernie Sanders was cheated by Hillary and her sinister team of fixers in the DNC.

Then there's the media coverage. Not only is it forensic, it's passionate, with pundits aplenty duking it out over every issue, development and faux pas. Yes, the MSM is amazingly biased. But there's still more diversity than in Australia, particularly when it comes to TV. Here, the only well known conservatives are Andrew Bolt and a couple of others. The rest are mostly smug, virtue signaling lefties. If Australian journos aren't pushing the PC agenda with zeal they're not challenging it either.

Speaking of media bias in the USA: In that nation, I think most citizens are fully aware of it. Still, last year, journos really nailed their flags to the mast more than they've ever done. The shameless way they went all in for Hillary shocked Americans. But it absolutely stunned Aussies.

I have no way of proving this of course. But I think a truly massive shift occurred in our perception of US media giants. While CNN and the like don't shape narratives about Australian politics, they certainly do so when it comes to global issues (which we still find extremely important, of course).

I think millions of my countrymen have concluded that these massive corporations are the biggest producers of “fake news” out there. We've realized that we've been fed massive lies for decades. And it's rattled us to the core.

This often traumatic deprogramming process is another reason we've been so focused on US politics. In the past we had a moderate interest in this subject because we actually thought that it was being reported accurately and fairly. Now, we "hate watch" it as often as not, aghast at the sheer scale of the lies being told by the American liberal media. 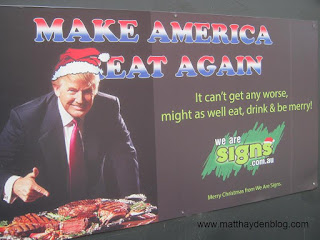 Then there's Donald J Trump himself. He's surely the most compelling, larger than life figure in American politics I can recall.

He's the quintessential brash, bombastic American, the kind of bloke we low-key Aussies have perennially had a very dim view of. But because he stands up to political correctness (which has proven to be just as toxic here as in the USA) millions of Aussies see him as a real hero.

The Christmas-themed ad for a sign shop in Balmain shown above is testament to this ambivalence. It kinda nods to the lefty, PC view of Trump as prez being a terribly bad thing for the world. But it also employs his catchphrase in its exhortation to passers by to have a good time over the break.

Trump is clearly living rent free in the heads of millions of Australians -- which is kinda apt given his history as a global real estate mogul.

No wonder Google searches for his name came in at seventh overall. That beat all Aussie pollies by a country mile.

Now the local political establishment and MSM -- both terminally PC -- are worried. They are cogs in the corrupt globalist machine that Trump has stood up to and stared down. So they are very concerned about how his influence is gonna play out here.

At the moment the closest equivalent to Trump is clearly Pauline Hanson. So it's no surprise that she ranked as the fourth most Googled individual locally, well ahead of Malcolm Turnbull.

When you're Australia's PM and you rank way below an American billionaire and a much maligned female “outsider” in public interest, that's pretty significant. Being the narcissist he is, he's prolly pretty concerned about this. (And if he isn't, he should be.)

And to think Trump hasn't even been sworn in yet … This year is gonna be yuuuge!
Posted by MattHaydenAU at 9:51 AM