As we all know, white male bashing is one of the favourite pastimes for the Left, especially in "higher education" (lower indoctrination, more like!). Feminists in particular get off on it because it removes the need for actual thought and argument (which they find so terrifying, the poor little poppets). They can feel smug and secure in their sense of victimhood and get to demonize and shout down their opponents at the same time. What's not to like?

It's kinda weird that they've taken themselves to such a stupid place, of course. But it's even more bizarre when a white male himself uses this line of "argument". Take Michael Pascoe, in a recent episode of The Dumb. 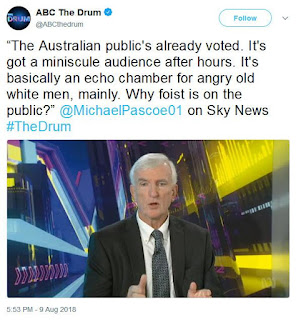 Bloviating about Sky News, the pasty ol' pillock arced up big time. What a laugh! If anyone fit the description of "angry old white man" it was Pascoe himself!

And this kind of idiocy is common for the Left. Bolshies are brimming while conservatives are calm, generally speaking. And there seem to be as many (maybe more?) pale penis-persons in the former group as there are in the latter.

I have seen this phenomenon play out time and time again, especially on their ABC. It always amuses me that the moderator (often a pallid dude -- Snowcone Tone, for example) never calls out the irony.

But that's the first thing any sensible person would do, right? I mean, if I were the panel-wrangler in this case I'd say: "Well you fit that description yourself, Michael. So are you saying that your point of view shouldn't be heard, or is unworthy of consideration?"

To which he would no doubt reply "well of course not", or something similar.

And I'd respond with: "So stick to the actual ideas we're discussing, and quit this stupid ad hom crap ... you fricken arsehat!" Er, or words to that effect.

But this just never happens. The moderators -- and other panellists, for that matter -- just let these idiots quack on because they love to hear their stupid ideology echoed, thereby reaffirming their tribal sense of righteousness. 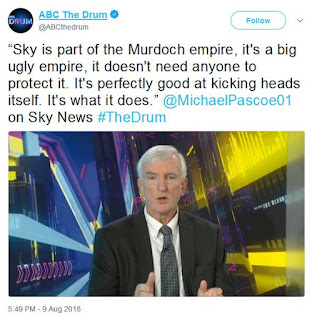 Replace "Sky" with "The Drum" and "Murdoch empire" with "the ABC" and you have a perfect retort for all the luvvies fretting about the looming threat of privatization, and who are now saying Auntie desperately needs more support to remain "independent".